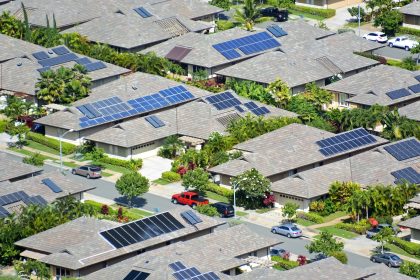 Unprecedented investments in clean energy and climate change in the Inflation Reduction Act have greatly improved the outlook for the solar industry’s growth in the U.S. Especially following a first half to the year dampened by tariff risks.  Also, supply chain constraints as according to a new market report.

The Solar Energy Industries Association and Wood Mackenzie published a report that increases their baseline forecast for solar growth over the next five years by 40% in response to the historic law.

Moreover, the groups expect the U.S. to add 162 GW of new capacity through 2027. That’s a 62 GW boost from a previous estimate. If the projections hold up, installed solar capacity in the U.S. could reach 336 GW at that point.

“This report provides an early look at how the Inflation Reduction Act is going to transform America’s energy economy. And the forecasts show a wave of clean energy and manufacturing investments. Moreover, that will uplift communities nationwide,” SEIA CEO Abigail Ross Hopper said.

The Inflation Reduction Act Plays A Big Role in Solar

The Inflation Reduction Act provided certainty to solar developers with a 10-year extension of the critical Investment Tax Credit. The law also established incentives for domestic production throughout the solar value chain. It includes polysilicon, cells, modules, inverters, trackers, among other things.

A flurry of announcements has followed the signing of the Inflation Reduction Act into law.

First Solar and Q Cells have announced billion-dollar plans to invest in solar module manufacturing in the U.S.