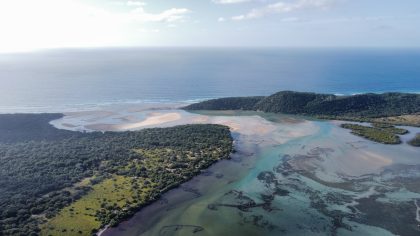 The program is recognized for restoring 160 acres of marsh habitat in the Nueces Bay.

Ben Scaggs, Director of Gulf of Mexico Program said, “Whether for individual recreational use or as an economic engine supporting a wide variety of jobs and industry, the Gulf of Mexico is a vibrant yet vulnerable ecosystem. Protecting this national resource requires innovative approaches and proactive measures. The Gulf Guardian award winners are paving the way for ‘out of the box’ thinking and replicable practices.”

The Nueces Bay Marsh is a 160-acre marsh restoration project along the Nueces Bay Causeway between Corpus Christi, Texas, and Portland, Texas.

Over the last 10 years many funding partners have assisted with the $5.3 million restoration effort, with more valuable contributions coming from volunteers and the public.

The project benefits the health and productivity of the Gulf by creating a 160-acre marsh complex. That’s a complex in an area that had seen significant habitat loss in the last 50 years. The Nueces Bay connects to the Gulf of Mexico via Corpus Christi Bay and Aransas Pass. The Nueces estuary is critical to the growth and development of shrimp. Additionally, it was designated by Texas Parks and Wildlife Department as a shrimp nursery area. Moreover, there is no commercial shrimping allowed. Many marine species will benefit from this restored nursery grounds.

The Gulf of Mexico Program began in 1988. Its goal is to protect, restore, and maintain the health and productivity of the Gulf of Mexico ecosystem. Moreover, in economically sustainable ways. The Gulf of Mexico Program is underwritten by the U.S. Environmental Protection Agency and is a non-regulatory, inclusive consortium of state and federal government agencies. Not to mention representatives of the business and agricultural community, fishing industry, and scientists. It also includes environmentalists, and community leaders from all five Gulf States. The Gulf Program seeks to improve the environmental health of the Gulf in concert with economic development.

For more about EPA’s Gulf of Mexico Program: https://www.epa.gov/gulfofmexico