Over the last half decade, smart home technology has gone from being a novelty item exclusive to tech enthusiasts and luxury home owners. Now to a mainstream feature taken for granted by the average homeowner. In 2013, just 13 percent of American households had some type of smart home features. That’s what Strategy Analytics data shows. In 2019, this will reach 22.5 percent. Again, that’s what S&P Global Market Intelligence estimates. Even more impressively, 90 percent of American consumers now own at least one smart home device. All according to Metova research. Finally and 34 percent of consumers own two or three, reports GfK Research. 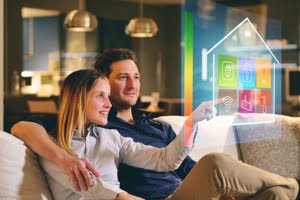 Widespread acceptance of smart home technology, growing home ownership among millennials. Plus demand for green home features, value and security are some of the factors driving this rapid adoption. All says Unity Home Group. One reason home owners have become more accepting of smart home technology is that innovations have made smart features less gadget-like. Also and more integrated with today’s typical home and lifestyle. Here’s a look at three of the tech trends that are helping make smart homes an invisible part of everyday life.

One of the biggest reasons smart home technology has become more invisible is the widespread adoption of smart speaker systems such as Amazon Alexa and Google Home. Smart speakers provide a more user-friendly interface for smart home devices. I mean than traditional interfaces such as touch screens. Instead of requiring a specialized screen to access their devices, new game. Now consumers can now control their smart homes by just using the sound of their voice.

Promoting this trend, a growing number of smart home device manufacturers are providing apps. All to make their products easier to use. I mean in some cases integrating them with smart speaker technology. All for even greater user-friendliness.

For instance, Lorex wireless security camera systems can be controlled via a Lorex Smart Home app. An app that connects with Alexa and lets you run several smart home devices from a single interface. Smart thermostats and other energy-saving devices are also now accessible through apps. Those that integrate with smart speaker systems it’s simple. For it makes it easy for homeowners to lower their carbon footprints.

Not yet as widespread as smart speakers and apps but rapidly gaining adoption is the use of augmented reality (AR) interfaces. All to manage smart home devices. AR allows homeowners to use their mobile device screens to view digital overlays of their homes. Then they can use these overlays as interfaces. That’s to control their smart home devices.

For example, the Smart AR Home app lets users create virtual â€œswitchesâ€ that can be placed throughout a cyberspace map of their home. By interacting with these switches on their smartphones or other screens, users can manage their smart home devices without having to physically touch them. For instance, you can digitally see how far a light switch dimmer is turned up and adjust the settings by swiping on your screen.

Smart speakers, mobile apps, and augmented reality are providing user-friendly interfaces that are making smart home management more intuitive for homeowners. By letting homeowners control their devices with the sound of their voice, their smartphone screens, and digital dials, these innovations are helping move smart home technology from the realm of esoteric gadgetry into the mainstream of American life.