Two childhood friends spent a decade, beginning in college, figuring out how to cheaply make plastic from pollution: carbon. All that’s been captured from the atmosphere. We just have to be aware through plastics is a tough nut to crack!

First of all, USA TODAY published on a global-warming-fighting technology that could take off in 2014. It’s called “AirCarbon,” and it transforms air pollution into plastic. The entire process is carbon-negative. Meaning it actually reduces greenhouse-gas emissions.

So someone thought I might find AirCarbon’s story interesting. (You can read the full story here, complete with a video of the technology in action: http://www.usatoday.com/story/news/nation/2013/12/30/plastic-from-carbon-emissions/4192945/.)

So the material could begin replacing conventional oil-based plastics. As well as it can fight climate change at the same time. Today! It’s Wisconsin-based manufacturer KI Furniture. They will be among the first companies to put AirCarbon to use. All in its products this year, with several lines of new chairs.

As the USA today reported:

A decade ago in his Princeton dorm room, Mark Herrema had an aha moment. He read a newspaper story about the rise in heat-trapping methane emissions. All from dairy farms. So he decided to do something about it.

He thought, why not pull the carbon from the air and use it to make stuff? A politics major who also studied chemistry, he teamed up with childhood friend Kenton Kimmel. He’s a biomedical engineering student at Northwestern University. They took odd jobs after graduation to fund their research.

In addition, industry experts told them it was a fool’s errand. I mean and for good reason. Because Scientists had spent decades trying to capture carbon. Plus separately they have been trying to capture it and use it to make plastic. However they couldn’t do it cheaply enough. The two friends cracked the code by developing a ten-times more efficient bio-catalyst. One which strips the carbon from a liquefied gas. Then and rearranges it into a long chain plastic molecule. 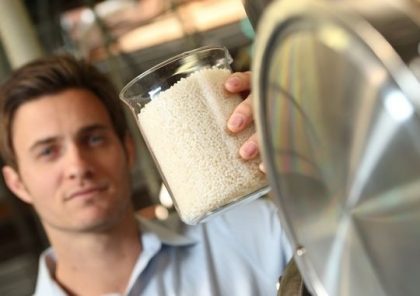 However and according to even PBS, biodegradable bags that had been left underwater in a marina are still there. I mean they could still hold a full load of groceries.

In a study published this week in Environmental Science and Technology, researchers put supposedly eco-friendly bags made from various organic and plastic materials and sourced from U.K. stores to the test. After three years buried in garden soil, submerged in ocean water, exposed to open light and air or stashed in a laboratory, none of the bags broke down completely in all the environments.

In fact, the biodegradable bags that had been left underwater in a marina could still hold a full load of groceries.

“What is the role of some of these really innovative and novel polymers?” asked Richard Thompson, a marine biologist from the University of Plymouth and the study’s senior author. A polymer is a repeating chain of chemicals that makes up a plastic’s structure, whether biodegradable or synthetic.

“They’re challenging to recycle and are very slow to degrade if they become litter in the environment,” Thompson said, suggesting these biodegradable plastics may be causing more problems than they solve.