The first version of the Ford’s Focus Electric Vehicle just got EPA certification of 110 miles per gallon equivalent (MPGe). That’s city rating and 99 MPGe on the highway.

Furthermore, the Focus Electric Vehicle (EV) also got 105 MPGe combined. This is higher than the Nissan Leaf by 6 MPGe.

According to Ford reps, The Focus EV has more passenger room and a faster charging system that allows for a full recharge in nearly half the time of Nissan Leaf. 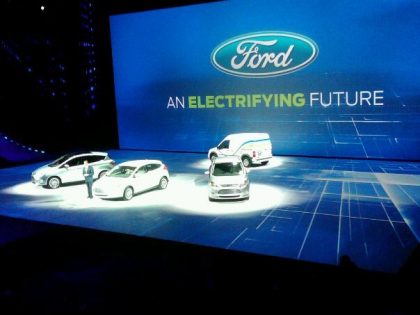 However as Green Car Reports notes:

Both the Focus Electric and the Leaf are five-door hatchbacks the size of conventional compact cars, with rated ranges between 80 and 85 miles.

The report comes via LeftLaneNews, which sources it to a dealer document it acquired.

The Ford Focus Electric line soon is joined by the new 2013 Ford Fusion Fusion Energi plug-in hybrid (phev). The PHEV is expected to get more than 100 MPGe in electric mode. That’s only for 25 miles at the most!

“Ford is giving customers the power of choice for leading fuel economy regardless of what type of vehicle or powertrain technology they choose,” said Eric Kuehn, chief nameplate engineer, Focus Electric. “The Focus and Fusion are great examples of how we transformed our fleet of cars, utilities and trucks with leading fuel efficiency.”

This EPA label also says customers could save $9,700 in fuel costs over the course of five years. However are more noteworthy, batteries in electric cars last longer then anyone rates them form.

Batteries will last longer than 10 plus years so $18,000 in fuel savings to start. Then and then don’t forget oil, brakes and all other parts.Comparative savings could go even higher if the current trend of rising gas prices continues. In California alone, the cost for a gallon of gas rose 20 cents in a seven-day period that ended last week.

Faster charging with 240 volts also can extend range as drivers can more quickly recharge between stops – up to 20 miles per charge hour – so they can significantly improve a car’s range during a busy day of driving by recharging multiple times.

Finally, to help cut charging costs at home, a unique value charging feature. All powered by Microsoft is designed to help owners in the U.S. charge their vehicles at the cheapest utility rates. That is so cool cause it can make charging the Focus Electric less costly than charging the Nissan Leaf.