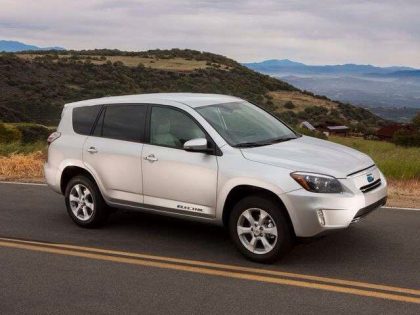 Not surprisingly Toyota is getting out of the RAV4 electric vehicle business. Their total acceptance and admission to Green Living Guy staff that the car was used to meet CARB credits was more than enough evidence to prove it was a foolhardy approach at a joint venture. The last time a car company only did an electric car for CARB credits was Ford and GM when they went junk bond status in 2004-2005.

Their consistent lack of understanding of want a customer needs and wants with their drive toward trying to convince people their cars reign supreme shows they are out of touch.

Management is so far off base when it comes to understanding people want electric cars and plugins. Recent quarterly reports show diminishing Prius sales and increasing plugin Prius sales. You’d think they’d get 1+1=2 but they think it’s 3.

This deteriorating destruction of Toyota now lends itself to Tesla outright dissing the car company. In a recent quarterly report from Tesla shows they will not be selling batteries or drive systems to Toyota going forward.

One of the first problems Toyota has shown was the plugin Prius. It’s a completely undersized battery pack for a plugin hybrid. It’s so bad that all the other competition is destroying Toyota with ranges of up to 50 percent more range than the plugin Prius.

Now, partner that with Tesla Motors developing their own crossover. According to USA Today, Bloomberg News found word of the end of the arrangment in a corporate filing from Tesla last week.

“Toyota is expected to end the current RAV4 EV model this year,” Bloomberg quotes Tesla as saying in the quarterly filing Friday. It says the deal was worth $15.1 million.

For the entire story on USA Today