An all-electric Renault Zoe has visited all four corners of the United Kingdom, covering a total of 2,500 miles (4,200 km), to prove that EV ‘range anxiety’ need no longer be an issue thanks to a three-fold increase in the number of rapid chargers in less than a year.

The tour, called Charging Around the UK (CATUK), visited 15 major towns and cities across the country as well as taking in John O’Groats in Scotland and Land’s End in Cornwall, respectively the most northerly and southerly points of the country.

As well as proving that it is quite possible to cover substantial distances in an EV, the 17 day tour included a number of events ranging from EV demos at participating Renault dealers to a lap of the famous ‘Top Gear’ track from Britain’s favorite motoring TV show.

CATUK was organized by charging company Pod Point and supported by Renault. Along the way, the little Zoe was recharged not just at Pod Point sites but also at motorway service stations, supermarkets, gyms and even residential addresses.

Starting in London, the tour headed north to Scotland then visited the North East, the Midlands and the West Country before returning to the South East and then finishing at Brighton on the South Coast to tie in with the Eco Technology Show.

In all, 72 public accessible charging points were used at a cost of… nothing. Adding together the savings on fuel, road tax, congestion charges and parking fees, the team reckons the trip would have cost £590 more had they used a conventional car. And then there are the savings in tailpipe emissions to consider…

Watch the video report of the tour below and find out more about CATUK here.
Source: Renault/Nissan Alliance 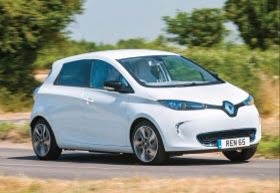