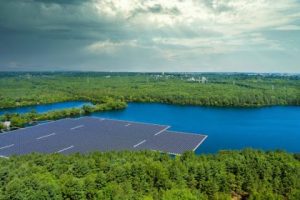 Awareness Week that was from March 6-12.

Quite literally, life as we know it would not be possible without groundwater.

“In times of drought or groundwater contamination — when people are noticeably affected — the value of groundwater becomes clear,” said Treyens. “What was said more than 200 years ago remains true today: ‘When the well runs dry, we shall know the value of water.’”

It is estimated that groundwater makes up an estimated 99 percent of all freshwater in the world. Here are some more interesting groundwater facts:

The 76 bgd used in the United States equals 1 billion, 586 million bathtubs full of water, enough to circle the Earth more than 60 times
India is the largest groundwater user in the world, using 66.3 trillion gallons in one year — enough water to fill an 18-inch-diameter pipeline to the Moon and back — 2,000 times
Groundwater is under most of the Earth’s surface
Under Africa’s Sahara Desert, there’s 20 times more groundwater than all the surface water in the entire continent’s lakes.

Groundwater is the world’s most extracted raw material withdrawal rates currently in the estimated range of 982 km3/year.

About 60% of groundwater withdrawn worldwide is used for agriculture; the rest is almost equally divided between the domestic and industrial sectors.

In many nations, more than half of the groundwater withdrawn is for domestic water supplies and globally it provides 25% to 40% of the world’s drinking water.

Globally, about 38% of irrigated lands are equipped for irrigation with groundwater.

76 billion gallons of groundwater a day (bgd) for all purposes
49.5 bgd for agricultural irrigation
15.7 bgd for public water supplies
3.5 bgd for individual households through privately owned water wells
3 bgd for livestock and aquaculture
2.9 bgd for industry (self-supplied)
1.1 bgd for mining

Because groundwater is “out of sight, out of mind” for most people, National Groundwater Awareness Week provides a convenient opportunity for people to learn about the importance of groundwater to their lives, said Treyens. He urged the public to visit NGWA’s groundwater fundamentals web page, as well as its website, WellOwner.org, where well owners can learn information vital to take care of their water quality and their wells.