Our culture is all about the here and now.  Turns out, humans don’t think long term in regards to the future. Moreover and we are destroying the environment for generations to come.  What will we leave them? Let’s increase our own awareness.  Let’s act responsibly for future generations.  Let’s turn this thing around. Watch “Breath of Life,” and follow news and updates about “12th Hour” – two important films about our planet” – Jeff Bridges 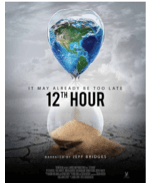 April 22, 2016, Los Angeles, CA –Today, in celebration of Earth Day 2016, Vision Films announces the upcoming release of an important and provocative environmental documentary feature film. For it’s called “12th Hour,”presented by Jeff Bridges (The Big Lebowski, True Grit). For he’s from “Breath of Life” director Susan Kucera. Set for release in Fall 2016. For “12th Hour” is the world’s first film that explores the human psychology behind our discourse. More interestingly why so many of us our resistant to play our part in saving our planet.

Currently in its final stages of production, “12th Hour” is about the reasons that after decades of warnings about the seriousness of human induced climate change and even as we are now experiencing those effects, global Co2 production continues to rise. Summoning the best thinkers on the planet to guide us in what we can do to overcome our own psychology, it is an insightful, eye-opening documentary filled with breathtaking images of our fragile planet, reminding us that there is no time to waste: we are now well into our 12th hour.

“12th Hour” is being produced by James Swift, and directed by Susan Kucera, who is also the cinematographer. It is shot in stunning 4K on location in Italy, Germany, Norway, Canada, France, Scotland, England and the U.S.A. In the tradition of “An Inconvenient Truth,” “The Cove,” “The 11th Hour,” and “Breath of Life,” the film will have a profound effect on all those who see it.

The film is set to be released theatrically by Vision Films in Fall 2016.

Managing Director/CEO of Vision Films Lise Romanoff says:“What I love about both of these films is that they show us why it’s so difficult for us to make the changes in our lives. Moreover those that will preserve our precious planet. More importantly and they really got me motivated to do more.“

James Swift says: ““Earth Day is a reminder to the world about the dangers our planet is facing. Susan and I are thrilled to be working with Jeff Bridges on “12th Hour” to explore the psychology behind why we seem so passively motivated in the face of almost assured planetary destruction if we don’t make immediate and significant changes to our living ways.”

Furthermore, “12th Hour” will be released in Fall 2016, and “Breath of Life” is available across all VOD platforms now.