The Human Spaces report into The Global Impact of Biophilic Design in the Workplace, commissioned by the global modular flooring experts of Interface and led by renowned organizational psychologist Professor Sir Cary Cooper. This report has clearly revealed that employees who work in environments with natural elements report a 15% higher level of well-being. Also they are 6% more productive and 15% more creative overall. 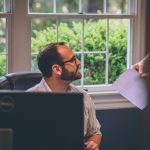 Globally, nearly half (47%) of office employees have no natural light in their working environment. As well as almost two thirds (58%) have no live plants in their workspace. In Canada 32% of workers reported having no windows. This was closely followed by Australia and the U.S., with 28% and 27% of workers, respectively, reporting having no windows.  Interestingly, these three countries all reported above average levels of stress.  Conversely, workers in Indonesia and India reported some of the highest levels of light and space at 93% and 92%, respectively. Finally and they reported some of the lowest levels of unhappiness.

In terms of working space, nearly two fifths (39%) of workers said they would feel most productive at their own desk in a solitary office. In terms of having a preference for solo space, Germany, China and Canada reported figures way above the global average, with 59%, 52% and 50%, respectively. Thereby suggesting they prefer a solitary environment. 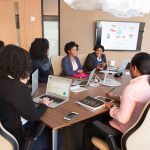 On the other hand, 36% of respondents would feel most productive at their own desk in an open plan office.

So interestingly, individual data from certain countries was much higher: Spain (48%); Australia (48%); India (46%); and Brazil (46%). Thereby indicating that collaborative working is much more important to them than the global average.

The data demonstrates that 85% of global office workers surveyed are based in an urban environment.  Also, the largest proportion of respondents spent between 40 – 49 hours per week in the office. Despite city-dominated lives, the research found workers have an inherent affinity for elements that reflect nature.  Aka environments with natural elements report great work ethics too!

It was reporting that Biophilic design is the art of understanding how nature can influence us. Furthermore, how we can bring those sorts of influences into the spaces within which we work. We can see that working in environments with natural elements report great feedback.

All with greenery and sunlight.

They lead to a higher level of well being and productivity. That which is an important consideration for any business in terms of responsibility to its employees. What’s more, the research indicates that by incorporating simple design elements which help to create a connection to nature. This is known as biophilic design. It’s so a business could potentially boost the productivity of its employees by 6%. That’s clearly a significant benefit to the bottom line of any company.