Waste is not just an issue in the United States. That’s because it’s a global problem. One that is also being addressed. All by recycling programs also around the world. Yet only a few countries have really cleaned up their acts. That means their recycling rate increased. That’s for example Switzerland and Austria. For their recycling rate is around 50% of their waste.

However, many countries have a lot of room for improvement. For example, Romania. They send about 99% of their waste to landfills. And also just 5% of the world’s population produces about 40% of the total waste.

In addition, yes recycling programs have improved globally. However, there’s still an opportunity for progress. In conclusion, here’s a look at worldwide recycling. That’s as it stands today, in this graphic by Perfect Rubber Mulch. 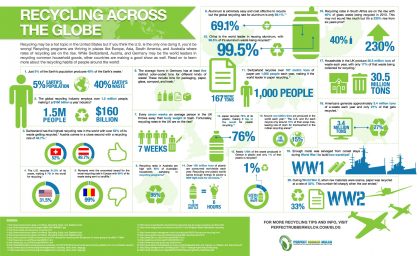 Here are the facts:

2. The global recycling industry employs over 1.5 million people, making it a $160 billion a year industry!

3. Switzerland also has the highest recycling rate in the world. That’s with over 52% of its waste getting recycled. Austria comes in a close second with a recycling rate of 49.7%.

5. Romania wins the uncoveted award for the worst recycling rate in Europe. Consequently with 99% of its waste being sent to landfills.

6. The average home in Germany has at least five distinct color-coded bins for different kinds of waste! These include bins for packaging, paper, glass, compost, and trash.

7. Every seven weeks an average person in the UK throws away their body weight in trash. Fortunately, recycling rates in the UK are certainly on the rise!

8. Recycling rates in Australia are also high. That’s more over with 95% of Australian households partaking in recycling programs!

9. Aluminum is also extremely easy and cost effective to recycle. However the global recycling rate for aluminum is consequently only 69.1%.

10. China is the world leader in reusing aluminum. That’s with 99.5% of it’s aluminum waste being recycled!

11. Switzerland also recycles over 167 metric tons of paper per 1,000 people each year. That’s certainly making it the world leader in paper recycling.

12. Most noteworthy, Japan recycles 76% of its plastic. That’s making it top in the world for plastic recycling.

13. Around one billion tires are produced in the world each year. The U.S. and EU each recycle only around 15% of their scrap tires. That’s leaving lots of room for improvement in the rubber recycling arena!

14. In addition, over 100 million tons of plastic are consumed worldwide each year. Recycling one plastic bottle saves enough energy to power a 60W light bulb for six hours.

15. Nearly 1/5th of the waste produced in Greece is plastic and only 1% of that plastic is recycled!

16. Recycling rates in South Africa are on the rise. That’s with 40% of glass waste being recycled in 2013. This may not sound like much. However, it’s a 230% rise from six years prior!

17. Households in the UK produce 30.5 million tons of waste each year. That’s with only 17% of that waste being collected for recycling.

18. Americans generate approximately 3.4 million tons of e-waste each year. I mean only 27% of that gets recycled.

19. In conclusion, enough metal was salvaged from corset stays during World War I to build two warships!

20. Finally, during World War II, when raw materials were scarce, paper was recycled at a rate of 33%. This number fell sharply when the war ended