Philips has led the way in designing an instantaneous ‘click-to-fit’ LED retrofit alternative for linear electronic instant start fluorescent tube lighting. Currently, installers need to re-wire the ballast to replace linear fluorescent tubes with TLEDs . This is due to a wide variety of electronic ballasts that exist in fluorescent tube lamps today. Consequently, the Philips InstantFit LED replacement tube requires no re-wiring. It also includes a smart electronic design that is compatible with existing electronic instant start ballasts and sockets. The result is a dramatic reduction in the time it takes to change from fluorescent to TLED lighting. For example, from over 20 minutes per fixture to a matter of seconds.

‘‘We studied the process for replacing fluorescent tubes with LED technology step by step to tackle those issues that dissuade facility managers and installers from making the switch. We found speed and simplicity were key,’’ said Rene van Schooten, CEO Light Sources and Electronics at Philips Lighting.

Ramón Silvero is the product manager of the lighting department at Gas Natural Fenosa, a Spanish natural gas utility company. He said that the amount of savings are spectacular.

Mariano Herranz, maintenance technician at Gas Natural Fenosa added, “Using the new LED tube does not need any special operation. You just substitute the old tube for a new LED one.”

Philips estimates that the installed base for fluorescent tube lighting today amounts to 12 billion (lamp) sockets globally. Therefore, linear fluorescent tube lighting with instant start ballast is one of the most common types of general lighting. People use these lamps in shops, offices and industrial spaces. In the US, about 7.4 billion square feet of office space alone can be positively impacted by installing the InstantFit. Therefore, the opportunity for energy and costs savings is huge. If current fluorescent lighting were replaced by TLED lamps globally it would result in huge savings. For instance, over 55 billion dollars in energy costs or the equivalent of energy generated by 210 medium sized power plants.

• LED tubes save over 40 percent in lighting related energy costs. Combined with their long lifetime, facility managers can recover their investment in just one to three years.

• Speed and simplicity in installation mean less business disruption and cost – an average supermarket can now switch to LED lighting in less than four days instead of four weeks.

The InstantFit breakthrough is a new milestone in Philips’ innovation record for the TLED market. In April 2013, Philips announced the creation of the world’s most energy-efficient lamp suitable for general lighting, unveiling an LED tube replacement prototype that produces a record 200 lumens per watt of high-quality white light (compared with 100lm/W for fluorescent lighting) without compromising on light quality.

Philips’ InstantFit LED replacement tube will be available in the first quarter of 2014. 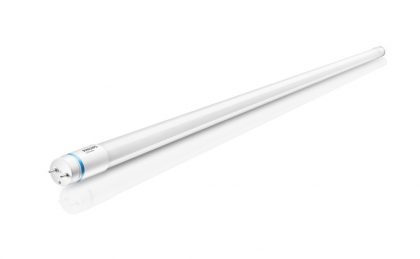