Who would think of a juvenile hormone from plants? First of all, a massive screening effort took place. One effort that sifted a lot. All through more than 1,600 plant species. For it has discovered a handful of compounds. Therefore, it can make the next generation of safe insecticides. I mean this is so so cool!

As I’ve written before, biotechnology-assisted production. It so provides many advantages. That’s compared to using traditional plant materials. Because plant-based compounds are consistently higher quality. All produced for industrial use year-round. They are also free of pollution and moreover plant diseases.

In the story about this on my site, also added about Birch cell cultures. For they can produce pigments. They also produce yellow carotenoids and furthermore red anthocyanins. As well, various amino acids are important for the skin. They also produce essential fatty acids. That’s for humans. Some examples are linoleic acid and alpha-linolenic acids.

These acids play an important role in maintaining the skin’s moisture. As well as skin elasticity. The chemical composition of cultured cells is different from the real plant. Furthermore, compound production volumes are influenced. All by different biotechnological processing methods. So this is all for safer cosmetics. I mean there are so many toxins in cosmetics. That’s why they need to be greener. With plant compounds, I know they will be!

In addition, an international research team isolated five metabolites. That’s from two types of plants. All as a result that counteract hormones. Most noteworthy though are the hormones are found only in insects. According to the researchers, it makes the compounds safe. Especially for people and the environment.

Consequently, the metabolites also are naturally produced. I mean by a species of shrub. Furthermore, one is called Lindera erythrocarpa. Also a common herbaceous flowering plant. One that is in the aster family. Now that’s named Solidago serotina. For they are chemical warfare agents now. All because the plants have evolved. As a result to thwart insect attackers.

Moreover, they work together. All by counteracting a core regulator of development. As well as the reproduction in insects. It’s also called a juvenile hormone.

In experiments, mosquitos of the species carrying yellow fever were tested. Only also to low doses of the natural insecticides. All of which are part of a class of insecticides. It’s called juvenile hormone antagonists (JHANs).

So guess what? The researchers watched as larvae died. Finally and the ovaries of juvenile females failed to develop fully. 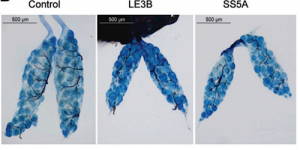 All because compound isolated from L. erythrocarpa [LE3B] and from S. serotina [SS5A]. Combined, they impaired ovarian development. Especially in treated female mosquitoes. [Left] Normal development of ovarian follicles from a female mosquito treated with solvent. [Center and Right] Ovaries from a 4-day-old female mosquito after treatment with 0.5 μg LE3B or SS5A per mosquito. Courtesy Raikhel et al./PNAS.)

In addition, a contingent of the team in South Korea is testing. Moreover to see whether the five metabolites have the same insecticidal qualities. Especially in also agricultural pests. In their paper, which appeared in the journal PNAS. The authors note the importance of finding new ways to control insects. All of which cause major economic and public health problems.

Finally For the entire story on Txnologist