Sharp has announced that they are developing semi-transparent solar panel windows. Those which can be mounted on balcony railings. I mean or high-rise windows.

Sharp`s windows are composed of laminated glass. All which are infused with solar cells.

Part of the sunlight is absorbed. It’s then used to generate a current. All while most of what`s left shines through the window. Thereby making it transparent. 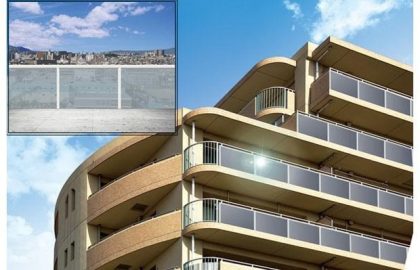 The solar panel windows will convert about 6.8% of incoming solar energy into electricity. In addition, it will have a maximum output of 95 watts. This is obviously much less then conventional solar panels. All which usually operate around 15-20%. However, this invention will be used quite differently.

Sharp will promote their product to homeowners.

Especially those who are looking to replace high-rise or balcony windows with electric producing. Many of them might not have the opportunity. I mean to get conventional solar panels. Especially because they live in apartment buildings. Also for other reasons. Imagine skyscrapers though. For they could be turned into massive power generators.

“If we could retrofit every high-rise building’s standard windows. All with this solar panel glass. Well then buildings would each become its own power plant. Those that are capable of generating. That’s at least a percentage of its energy needs.”

First off, it looks like Sharp`s semi-transparent solar windows only will be available in Japan. Launch date is already set to October.

However pricing has yet to been published. Most likely to be significantly higher than conventional solar panels cost.

In conclusion, if Sharp`s solar windows turn out to be a success in Japan. Watch out! For then the product will likely be available in other places.

Especially around the world. You know, within a couple of years.