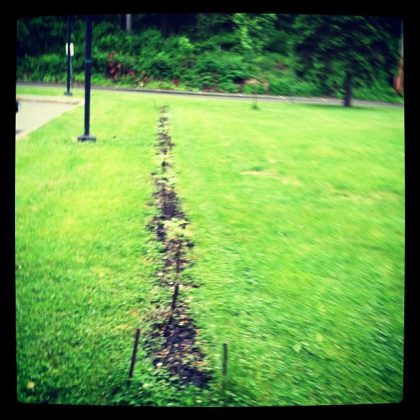 According to MIT, A single mature tree, meanwhile, may take in about 50 pounds of carbon dioxide per year. At this rate, it would take 640 trees per person to account for all American emissions. That which adds up to more than 200 billion trees. (A recent study estimated there are about 3 trillion trees on Earth right now.2

So when I saw the Todd Elementary School in my Briarcliff Manor School District planted trees equal to the amount of school buses. It was a sigh of relief!

Urban trees and forests affect climate change, but are often disregarded because their ecosystem services are not well- understood or quantified. Trees act as a sink for carbon dioxide (CO2) by fixing carbon during photosynthesis and storing carbon as biomass. The net long-term CO2 source/sink dynamics of forests change through time as trees grow, die, and decay.

According to Columbia University, researchers David Nowak and Robert Hoehn of the U.S. Forest Service with Satoshi Hirabayashi and Allison Bodine of the Davey Institute in Syracuse, NY estimated the amount of fine particulate matter that trees remove in 10 different cities. They also determined the impact trees have on PM2.5 concentrations (fine particulate matter consisting of small, airborne particles with a diameter of 2.5 micrometers or less) and the associated effects on human health.