First off, Bill Ford jr at the Go Further Conference was a sight to see. He was talking about a national energy strategy for ev chargers if we are to get serious about electric cars.

Three days in Detroit, Michigan, as one of 200 guests at Ford Motor Company’s annual Trend Conference.  Further, the event was a showcase of several Ford products. 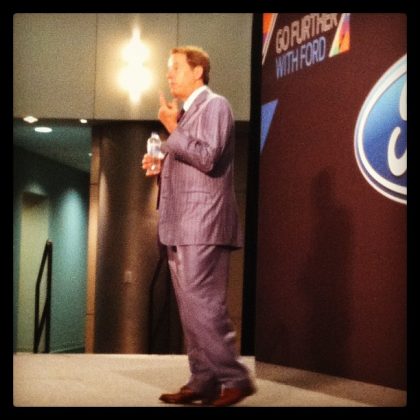 However and more importantly, it’s a look into the future direction of technology and environmental concerns for Ford and the auto industry.  Also, it was a jam-packed 3 days with several sessions interspersed with product demos and a test drive here and there.

During the rest of the trip, we heard from some really great speakers.  We got to tour many of Ford’s innovative facilities (ones with solar panels) and (they were already prepping cars for 2015!).  More interesting and we even got to test drive some of Ford’s  2013 models including the Police Interceptors, the Raptor, and Mustang GT (I have video).  I think if I HAD to pick a favorite moment, it would have to be going for a ride in the 2013 Raptor. I’m a bit of an adrenaline junkie and so having a professional driver take me through an off road course and even catching some air at one point, was so much fun!

Another great part of Ford’s Trend Conference was the workshops and panels set up to discuss some of the world’s leading fashion, ecological, and technological trends. Also and how they effect the automobile industry. Some notable speakers included Christian Siriano (fashion designer), Adrian Grenier (actor from Entourage/environmental activist).  I also like Gretchen Effgen (Zipcar’s Director of Business Development).

Finally, Now while I didn’t attend this group, Time reported that Steve Wozniak showed up.  You know, aka The man who co-founded Apple with pal Steve Jobs.  Plus and most importantly personally designed the very first Apple computers.  Yup, he took the stage at Ford’s “Go Furthe”‘ conference in Dearborn, Michigan.  He talked about the future of driving.  He was also reacting to splashy not-so-far-out vehicle concepts.  To Steve, that played like the automotive version of Microsoft‘s home of the future.