The launch, held at the team’s headquarters in Indianapolis, was attended by Alejandro Agag, CEO of Championship promoters Formula E Holdings and President, Chairman and CEO of Andretti Autosport Michael Andretti.

Andretti Autosport currently fields multiple entries in the IZOD IndyCar Series along with multiple campaigns in the Firestone Indy Lights, the Pro Mazda Championship and in the USF2000 National Championship. It is one of the most well-known and decorated teams in US motorsport with four IZOD IndyCar Series championships (2004, 2005, 2007 and 2012), two Firestone Indy Lights titles (2008 and 2009), one USF2000 championship (2010) and has won the world-famous Indianapolis 500 twice (2005 and 2007). Michael himself boasts a racing career spanning more than 20 years competing in CART and Formula One with a remarkable 42 victories in CART, a runner-up on five occasions and second on the list of the most IndyCar laps led, just behind his father Mario.

“It’s an honour for Andretti Autosport to have been selected as one of the 10 founding Formula E teams for the inaugural season,” said Michael Andretti. “I look forward to further exploring the series and helping build the future of open-wheel racing across the world.”

Andretti Autosport becomes the third team to join the new zero emission series which will see Formula cars racing on 10 city-centre circuits all around the world. They join UK-based Drayson Racing, who recently set the world electric land speed record, together with China Racing, headed up by the highly-regarded Steven Lu.

Alejandro Agag added: “We are absolutely delighted to welcome Andretti Autosport to the series; a team with an incredible racing pedigree and track record who I have no doubt is going to make a big contribution to the FIA Formula E Championship. It’s fantastic too for such a highly-established outfit to show its commitment to sustainable motoring and with two US races on the inaugural calendar – Los Angeles and Miami – I’m sure American motorsport fans will have a lot to cheer come race day.

“As well being the first team from the US, today’s announcement now means we have three teams from three different continents and we’re looking forward to announcing many more over the coming months.”

For the inaugural season, teams including Andretti Autosport will use the new Spark-Renault SRT_01E Formula E car, built by French-based company Spark Racing Technology, together with a consortium of the leading manufacturers in motorsport including McLaren, Williams, Renault and Dallara – with Michelin being the Championship’s Official Tyre Supplier and TAG Heuer the Official Time Keeper.

Patrice Ratti, CEO of Renault Sport Technologies who are overseeing the systems integration of the Spark-Renault SRT_01E, added: “As technical partner to Formula E and as a brand committed to motorsport for over 100 years, it is a great honour for Renault to welcome Andretti Autosport onboard. Andretti Autosport is one of the largest and most respected motorsport organizations in the world and we are delighted of their decision to join us in the new Zero-Emission professional racing series pioneered by FEH. Such great professional teams as Andretti Autosport will further inspire our engineers to develop an amazing race car and create a great show for motorsport fans around the world. With three professional teams now confirmed and more interested, we should soon have a complete grid for any other series to envy.” 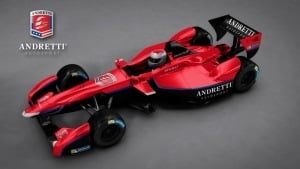