By: Jon Devine at NRDC

The chemical spill in West Virginia last week tells us a lot about how we protect – or how we don’t protect – rivers, lakes, and other surface waters from pollution. Although West Virginia American Water is in the process of lifting the “do not use” warning for drinking water supplied to nine West Virginia counties affected by the release of 4-methylcyclohexane methanol (MCHM) from Freedom Industries’ facility in Charleston into the Elk River, people there are still dealing with its toxic aftermath. In particular, the utility notes, the Centers for Disease Control and Prevention stated: “due to limited availability of data, and out of an abundance of caution, you may wish to consider an alternative drinking water source for pregnant women until the chemical is at non-detectable levels in the water distribution system.” As West Virginians start to put their lives back in order, we should pause to reflect on some important lessons we already have learned.

My colleague Daniel Rosenberg recently explained how this disaster is linked to flaws in the laws that should – but don’t – keep our families safe from toxic chemicals. And my colleague Erik Olson has shone a light on the fact that drinking water supplies are vulnerable to contamination by accidental or intentional pollution events, and that we need stronger protections against such harm, including clear authority for water utilities to take action to stop or prevent major upstream polluters from putting drinking water sources at risk of contamination. This post describes some of the loopholes in our pollution safety net for surface waters and how to better protect the waterways we use, not only to provide drinking water, but also for swimming, boating, and fishing. Although closing these loopholes is simple common sense – especially after the spill last week — the lobbying efforts of polluters may well stymie needed action.

This disaster should teach us all what West Virginians now know all too well – our surface waters are fragile, critically important for our families’ daily lives, and not adequately protected from pollution. As Angie Rosser of West Virginia Rivers Coalition recently wrote: “Now is the time to take a critical look at how to better protect our water sources. We can do this only by acknowledging that the Elk River spill is not a story about an isolated leak.” Indeed, the Freedom Industries spill illustrates the need to have safeguards against a major pollution event on a river used as a source of supply for a large population – safeguards that should be supported by everyone that wants to protect themselves and their families from hazardous contamination.

For the entire story 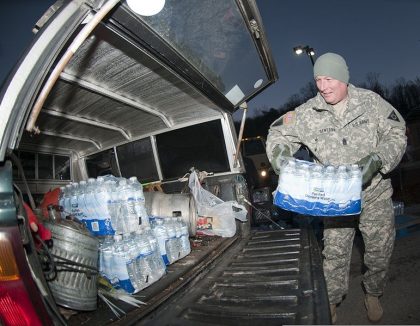