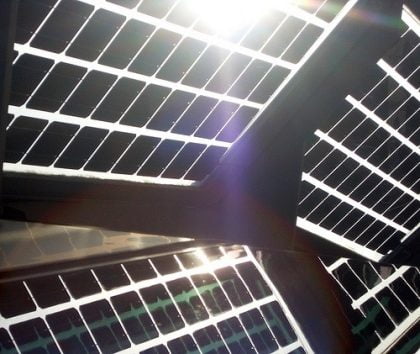 Ford announced the C-MAX Solar Energi Concept, a first-of-its-kind sun-powered vehicle with the potential to deliver the best of what a plug-in hybrid offers – without depending on the electric grid for fuel. The Ford C-MAX Solar Energi Concept harnesses the power of the sun by using a special concentrator that acts like a magnifying glass, directing intense rays to solar panels on the vehicle’s roof.

The best part is with solar that’s parabolic or like a magnifying glass, you can give intense rays of solar. This can sell in States or countries with bad weather may struggle to sell solar power. While we might want to buy one today, slow down. This is a demonstration. Yet with enough purchasing power we can see even rival Electric car companies making this technology effective and cheap enough.

The C-MAX Solar Energi Concept, a first-of-its-kind sun-powered vehicle with the potential to deliver the best of what a plug-in hybrid offers – without depending on the electric grid for fuel.

This is what I call an opportunity to display electric transportation at its best and how we can reduce or eliminate our reliance on oil. The upcoming FIA Electric Grand Prix and the MyEnergi Lifestyle are other examples to reinforce the possibilities of transportation today and in the future.

One fan recently asked me: Could we one say see a Racing championship happen with these cars?
Well there is the FIA Electric Grand Prix I always report about on my site. Formula E is a new FIA championship featuring Formula cars powered exclusively by electric energy –representing a vision for the future and serving as a framework for research and development around the electric vehicle. For the first season only, all 10 teams – each with two drivers – will compete using the new Spark-Renault SRT_01E car which completed its successful test debut last month. This one technology will one day have an ability to make the cars go longer distances and speeds. The more battery prices continue to come down it will bring down the cost of all electric cars; even though the Smart electric in the USA is $26,000. With the possibility of one of these racing championships you can easily see sponsors related to the Green industry such as Green Car makers Nissan, The Green Insurance Company and others. Well, the electric vehicle market will expand. it’s coming. Just be patient.

The FIA Electric Grand Prix again reinforces the all electric car or “plug-in” lifestyle. Ford Motor Company has developed a MyEnergi Lifestyle to be the all inclusive lifestyle with an electric or plug-in hybrid electric car. The MyEnergi Lifestyle is a concept revealed by Ford and several partners at 2013 CES which uses math, science and computer modeling to help homeowners understand how they can take advantage of energy-efficient home appliances, solar power systems and electric vehicles or even plug-in hybrid vehicles to significantly reduce monthly expenses while also reducing their overall carbon footprint. This interconnectivity of the car to the home will be another venue (like the Electric Grand Prix) to reinforce the all electric car.

While Ford has just completed the new C-MAX model, this might inspire other Auto-makers to jump on the Solar Powered Cars. Toyota tried it once with the Prius. We’ll see what happens tomorrow.

Please realize though that even in 2012, it was reported that drivers will save $68 billion in fuel annually when every new car produced gets to 54.5 mpg in 2030 as reported by the Natural Resources Defense Council.

“Drivers today have twice the fuel-efficient car options than just three years ago. The technology –and fuel savings— are only going to improve thanks to even stronger efficiency standards,” said Luke Tonachel, senior vehicles analyst at the Natural Resources Defense Council. “As consumers look to trade in older cars over time, they will have the latest in fuel saving technology available to them, putting money back in their pockets.”

However, what gets people really excited is the opportunity of no fuel in an all electric car, versus paying over $3.80 per gallon of gas, plus oil and all the other things we pay for with gas cars. The solar car from Ford is the tip of the iceberg on this issue of electric transportation. Let’s see this efficiency race continue. It only helps society, the economy and the environment in the long run. 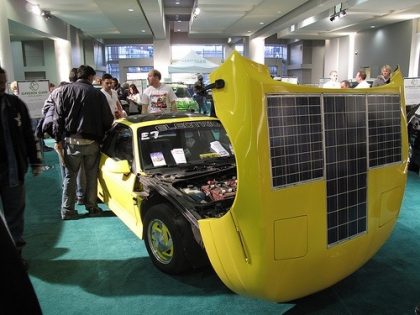