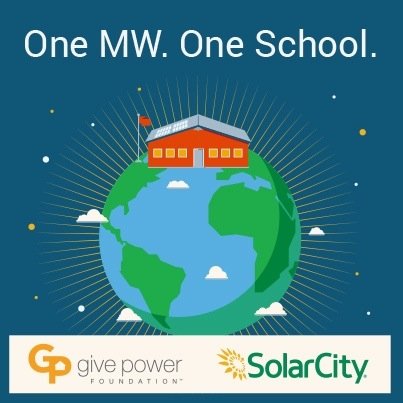 By giving light to one new school for each megawatt of solar power it deploys, Give Power Foundation will make clean energy accessible to schools around the world

San Mateo, Calif., Dec. 17, 2013 – Following the one year anniversary of the company’s initial public offering, SolarCity® (Nasdaq: SCTY) today launched the Give Power Foundation™ to build a cleaner, more sustainable future by providing solar energy to those in need. For every megawatt of residential solar power that SolarCity installs in 2014, the company will bring light to a community by donating a solar power system and battery combination to a school without access to electricity.

Approximately 291 million children attend primary schools that lack electricity globally, and 1.4 billion people around the world do not have access to power.* Through the Give Power Foundation, SolarCity will bring clean energy to communities across the globe, with initial recipients expected to be in Haiti, Mali, Malawi and Nepal.

By giving the gift of light, SolarCity will enable schools in remote locations to serve as community gathering places in the evening, and foster continuing education for adults. The solar system will charge a battery pack to keep the school lit at night – allowing adults and others who aren’t able to learn during the day the freedom to convene at night in a well-lit environment.
“The United Nations has set the ambitious goal of ensuring that everyone in the world has access to electricity by 2030, while fighting climate change, and we are deeply committed to making this happen through the Give Power Foundation,” said Hayes Barnard, SolarCity’s Chief Revenue Officer and President of Give Power Foundation. “Now every SolarCity customer will play a part in giving light to a community in need.”

The Foundation is partnering with buildOn, an international nonprofit organization that builds schools in developing countries and runs afterschool service programs in United States high schools, to help deliver power to communities in need. The Foundation will continue exploring and developing new partnerships with international organizations and social enterprises to help serve additional communities without electricity.
SolarCity’s Give Power Foundation is a California non-profit, public benefit corporation with anticipation of being granted exempt status as a 501c3 organization in 2014.

If you are an organization that delivers products or services for schools in the developing world and are interested in a partnership, contact at givepower@solarcity.com.