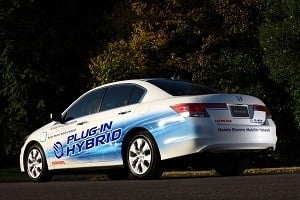 It’s good that Honda finally created a PHEV Accord, but it’s even better that they chose to ditch the kitschy, PR-friendly vinyl wrap.

If you’re keeping an eye on the green-car market, you might have noticed an increased incidence of “plug-in hybrids” being sold alongside both full-electric vehicles and traditional, non-plug-in hybrid electric vehicles. It might just sound like a traditional hybrid with a spot to plug it into a wall, but there’s much more involved than just adding a connector.

Just like typical hybrids, plug-in hybrid-electric vehicles (PHEVs) use both an internal combustion engine (ICE) and an electric motor. The batteries can be charged by the ICE during vehicle operation, also like a traditional hybrid. Furthermore (to keep these two types of hybrids looking similar), both can run off the ICE itself when the batteries are depleted.

However, while standard hybrids use the electric half of their systems to support the ICE, in a PHEV, the electrical components can replace the standard gas-guzzling motor. This is due to the PHEV’s larger and reworked battery system, which can be recharged by plugging the batteries into the electrical grid (through a standard 120-volt wall outlet or otherwise).

The whole goal is to create a hybrid-electric vehicle that’s capable of driving more than 10 miles off a purely-electrical charge. Due to space constraints, each plug-in hybrid has a different range in full-electric mode, but most PHEVs average 20 or so miles without using a drop of gas. This is where it helps to bridge the gap between hybrids and purely-electric vehicles.

There are actually three distinct types of PHEVs available on the market – series, parallel, or series-parallel hybrids. Series hybrids operate in a straight line, so to speak; the engine powers a generator, which supplies electrical current to motors that then drive the wheels. Examples of series hybrids include the Chevrolet Volt and Fisker Karma. With a parallel hybrid, the ICE and electric motors are two distinct sources, both capable of powering the drive wheels, or charging the batteries – Honda’s Civic, Accord, and Insight hybrids are examples of parallel systems, although two of the three are just standard hybrids.

Obviously, the biggest benefit to a PHEV is the ability to go for longer distances on an electric charge, without the range anxiety inherent in full-electric vehicles. This means a more limited use of the ICE – especially if your commute is under 20 miles – resulting in more efficiency than a standard hybrid vehicle. Some owners might never even use the ICE under normal circumstances.

Of course, there are drawbacks, as well. There is an additional incurred cost when buying PHEVs, thanks largely to the costs associated with the larger battery packs. Furthermore, owners without reliable, secure access to the electrical grid (for example, people who park on the street in a major city) won’t reap the battery-based benefits that come from having a fully-charged vehicle ready and waiting every morning.

There’s also the issue of noise. When an electric drivetrain is operating without an ICE, there’s nearly no noise coming from the vehicle, which means pedestrians (especially those with visual impairments) are at a greater risk of being accidentally hit by a stealthy Volt rolling down the street. To combat this, many governments (the U.S. included) are requiring vehicles with electric drivetrains to emit a noise under a certain speed.

Whether or not a PHEV is beneficial to the environment rests solely on the owner. Commute distances, sources of power, and a whole host of other factors come into play. If your town powers its electrical grid from a coal plant, you might not be helping the environment very much. However, if you have access to a grid that’s powered largely by renewable energy, and you don’t live very far from the office (but you’ve been known to travel further), a plug-in hybrid would be your best bet. 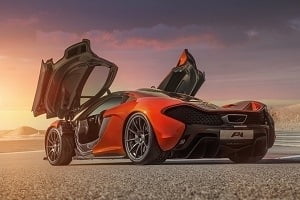 Believe it or not, the McLaren P1 hypercar is also an example of a PHEV. Now THAT is how you save the environment.