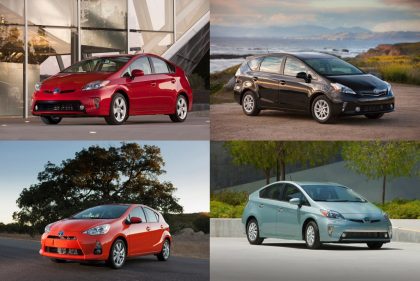 TORRANCE, Calif., (Feb. 18, 2014) – The Prius took home the gold in 2013 as the most popular vehicle-line in California for the second year in a row. The Prius Family (Prius Liftback, Prius v, Prius c and Prius Plug-in) took the podium in both 2012 and 2013 as the best-selling California vehicle name plate. 69,728 drivers hit the road in 2013, according to the California Auto Outlook Report, while 61,893 Californians joined the family in 2012. In the Golden State, the Prius Family outsells all other hybrid competitors combined.

California drivers lead the country in adoption of vehicles powered, either wholly or partially, by electricity. 9.3% of vehicles sold in the state run on some form of electricity, according to the report. But despite the growing number of hybrid competitors, Toyota’s hybrid leadership remains unmatched. In fact, one out of every two hybrids in California carries the Prius name plate.

“For many customers Prius is synonymous with hybrid, especially in California,” said Bill Fay, group vice president and general manager of Toyota Motor Sales, Inc. “When the Prius was launched in 2000, many dismissed it as a “science project”, but owners were enamored by its great MPG and lower emissions for a cleaner environment. Over the last decade, Toyota has sold more than 1.5 million Prius vehicles in the U.S. and we’re not slowing down anytime soon.”

The engineering team never stops looking for innovative ways to support and enhance the experience of those millions of customers. Toyota recently announced verification testing of a wireless battery charging system for Prius Plug-in hybrid. The system, currently being tested in Japan, will charge the vehicle by simply parking over a charge coil system on the ground. No cords, no plugs needed, making it easier for customers to enjoy the estimated 95 mpge* (miles per gallon equivalent).

Using magnetic-resonance technology, the system is designed to counteract electrical transmission issues caused by vehicle misalignment or height differences between the vehicle and charging system. To ensure the vehicle is set for optimum charging, engineers developed a parking assist function that highlights the position of the charge coil within the parking space.

Three Prius Plug-in hybrids will test the wireless charging system at homes in Aichi Prefecture, Japan over the next year. Similar testing is expected in Europe and the U.S. later this year.