The new 2012 Prius Plug-in Hybrid, which offers seating for five, is expected to achieve a manufacturer-estimated 87 MPGe (miles per gallon equivalent) in combined driving and 49 MPG in hybrid mode.  We’ve got your:

The 2012 Toyota Prius Plug-in Hybrid will allow true EV operation and performance for up to 15 miles at speeds up to 62 mph. 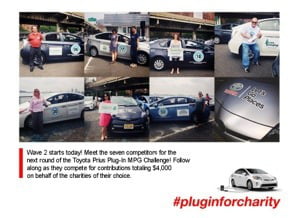 It even give you a home charging station for either 120 volts or 240 volts.  Toyota reports:

Even with the addition of the new onboard battery charging system and larger 176-lb. Li-ion battery pack, the 2012 Prius Plug-in Hybrid weighs just 123 lbs.

For that’s more than the standard Prius Liftback. All thanks to weight-savings techniques applied elsewhere. As a result, driving performance for the 2012 Prius Plug-in Hybrid will be similar to the standard Prius.

Running in EV mode, the system switches to full hybrid mode under full acceleration, which splits engine power between the drive wheels and the generator, keeping the battery charged – just as in the standard Prius model.

I mean talk about even when not running in the driver-selectable EV mode. Because the Prius Plug-in Hybrid will rely more on its electric-only capability. That’s in situations where it is more efficient than running the gasoline engine. I mean especially in urban and suburban driving. Also for and during shorter trips. Especially when drivers will enjoy the smoothness and quiet of EV operation. The overall fuel economy rating for the Prius Plug-in Hybrid increases to a manufacturer-expected 87 MPGe, with the car achieving an estimated 49 MPG when operating in hybrid mode. Drivers who use the vehicle for frequent short trips and local driving will realize the biggest reduction in gasoline usage.