So as I have written before, I now review cars for Autos.Answers.com. It’s one of the greatest search engines for any car out there. However it’s fun to get top billing for all of my Stories. Very grateful for this team they have. Spot on folks.

Anyway, here is a segment of my honest story of the 2013 Toyota Highlander Hybrid Electric Limited Edition.

An easy ride is the first thing that comes to mind when driving the 2013 Toyota Highlander Hybrid Electric Car Limited Edition. While it still feels and drives like the gas counterpart, this version has the Synergy Hybrid Drive included which saves some energy and fuel; yet not as much as it could. The luxurious feel to the car was nice but not enough to make up for the lack of fuel economy and overall savings.

Fuel Efficiency
The Highlander Hybrid’s Hybrid Synergy Drive features a 3.5-liter V6 for 2011-2013. It replaced the previous 3.3-liter V6 in 2011. While it is a V6 it has an electric drive motor/generator to give you 280 net horsepower. Yet, the 2013 still has a fuel economy rating of 32 mpg in the city and 28 mpg on the highway. It only is from extra regenerative braking opportunities and less and more efficiency.

As well, the 32 mpg is a slight improvement from previous years but the Ford Escape 2013 and 2014 get 28-30 miles per gallon vs this hybrid. That’s why it is so disappointing.

For the entire story at: Autos.Answers.com 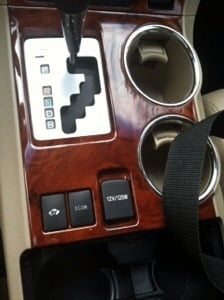