Building on its commitment to sustainability across the entire company, NBCUniversal’s Green is Universal initiative celebrated its seventh Earth Week with a slate of environmentally-themed events, programming and public awareness initiatives.

Earth Week, Green is Universal will launch an ambitious new energy awareness campaign, “Lights Off. Screens On.” The campaign asks consumers to reduce their carbon footprint by turning off the lights when they turn on screens to watch their televisions, computers, tablets or smartphones.

Starting on April 21, consumers were able to take a pledge on the interactive site to turn off the lights, and in exchange receive the option to enter a contest to win an energy-efficient television and other environmentally-friendly prizes. Visitors to the site were able to access a variety of special NBCUniversal programming. 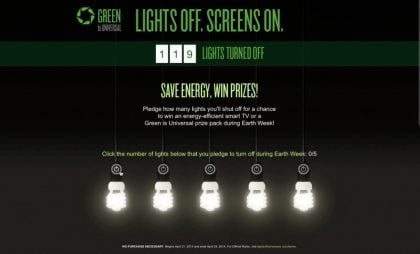