SpinGreen, which recently installed three collection bins at the 4,000-unit development.  For it hosted the event to bring about awareness of textile recycling and PNC’s textile recycling program. The event, which also offered food, entertainment and an informational talk.  All about textile recycling and was attended by Assemblymember Luis R. Sepulveda (District 87).  Moreover representatives of Sustainable South Bronx.  For that’s an organization that advocates green development in the south Bronx.  I mean with also more than 100 residents.

As I have written before and well before MacLemore, there were some people who have always held the belief that paying $20 for every t-shirt and $60 for every pair of jeans is too much money to spend on clothing. Recently, a lot more people have subscribed to that notion and have stopped buying everything new.

Thrift stores held an important place in American consumer society until the 1950s. It’s not a coincidence that declining secondhand purchases happened around the same time as the advent of credit cards and the widespread belief that the surefire way to keep the postwar economy afloat was to buy, buy, buy. And so Americans bought new stuff by the bunches: cars, homes, appliances and clothes.

Thrift stores faded into the background for several decades until making a big comeback in the past few years. According to the National Association of Resale Professionals, the number of resale stores increased by 7% in both 2011 and 2012.

There are several explanations for this. The Great Recession is still close by in the rearview mirror, and as property values drop and unemployment climbs, certain businesses not only stay afloat but thrive, including thrift stores (auto repair businesses also thrive as people hold on to older cars longer).

The average household spends $121 monthly on clothing. Despite a recent recession, we still buy a lot of clothing, wearing much of it only a few times before moving on and letting it fade into the forgotten depths of the closet. Although just 15% of clothing waste is reused or recycled, the clothes that are given a second life are often in good condition and still fashionable enough to be worn by someone else.

The program is already seeing tremendous success. In less than three weeks, SpinGr 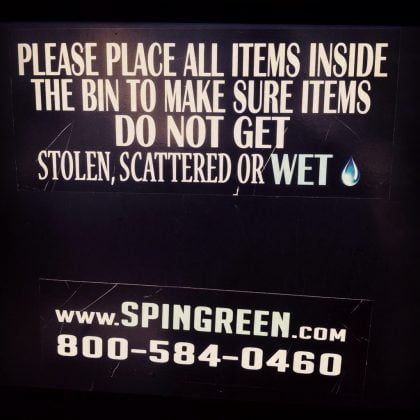 een has already collected over 6,000 pounds of textiles, the equivalent of preventing 22,000 pounds of CO2 from polluting the atmosphere and saving 8.4M gallons of water. It also helps to avoid the dispersal of a significant quantity of insecticides to the atmosphere.

Finally, SpinGreen owns and manages a network of over 600 recycling and donation bins.  All throughout New York. In conclusion, its bins collect unwanted shoes, clothing, linens and bedding.  For I mean no matter its condition.  For that’s ripped, torn and stained. Whatever can be reused is donated to local partnering organizations.  For that’s including the local Boys and Girls Clubs.  I mean and whatever cannot will end up being recycled for commercial use.