LOS ANGELES – Disneyland Resort was recognized by the U.S. Environmental Protection Agency with the 2014 Food Recovery Challenge award for its zero waste efforts, and the highest percent increase in food recovery of any theme park in the nation. 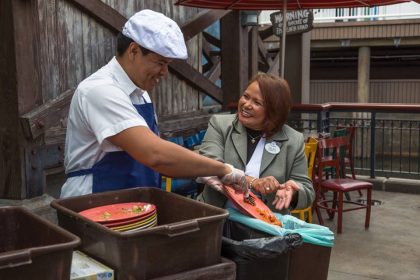 “Disneyland is a model for food recovery efforts,” said Jared Blumenfeld, EPA’s Regional Administrator for the Pacific Southwest. “Disney has the potential to educate millions of people who visit the resort on zero waste, while doing its part to fight climate change and create a better environment for Southern California residents.”

The EPA’s Food Recovery Challenge partners with organizations and businesses to prevent and reduce wasted food. The participants include groups such as grocers, educational institutions, sports and entertainment venues, restaurants and hotels. The program helps participants save money, reduce hunger in communities, and protect the environment by purchasing less, donating extra food and composting.

“I am so proud that our Cast Members are being recognized for their creative approach to keeping the environment top of mind,” said Jon Storbeck, vice president of Resort Hotels and Downtown Disney, who also leads environmental integration efforts at Disneyland Resort. “The Disneyland Resort is honored to continue Walt Disney’s legacy of conservation stewardship, and even more proud to build upon it with programs such as these.”

Since 2013, as part of its efforts under the Food Recovery Challenge, the Disneyland Resort:

Diverted more than 7 million pounds of food scraps from entering landfills and donated more than 50 tons of surplus food to people. 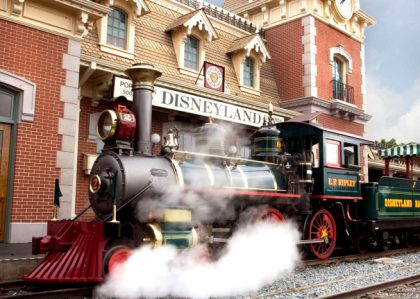 more than 1,200 tons of on-site used cooking oil from Resort restaurants converted to biodiesel, which fuels the Disneyland Railroad and Mark Twain Riverboat and has reduced the Resort’s consumption of petroleum-based diesel by about 150,000 gallons per year.

Was recognized by the U.S. Zero Waste Business Council for achieving a 99.8% diversion rate at Circle D Corral, the first location in The Walt Disney Company or any theme park to receive a Zero Waste certification. Circle D Corral, a working ranch that is home to the animals of the Disneyland Resort, collects animal waste, hay scraps, and wood shavings, as well as coffee grounds from Resort restaurants, and laundry lint from hotel clothes dryers, producing 600,000 pounds of compost per year.

In addition, in December 2014, Disneyland Resort began a surplus food donation program. In the first three months, it donated 3,800 pounds of prepared, unserved food from restaurants and banquets at the Disneyland Hotel to Second Harvest Food Bank of Orange County for distribution to people in need within the community. The resort also donates surplus, pre-packaged food from its merchandise locations to local food banks. To date, it has donated more than 110,000 pounds of packaged food, valued at $360,000.

In 2012, Americans threw away nearly 35 million tons of food; that’s more than any other type of material being landfilled. As wasted food decomposes in a landfill, it generates methane, a greenhouse gas 25 times more potent than carbon dioxide.

The U.S. Department of Agriculture estimates that wasted food costs America more than $165 billion annually and that the average family of four throws away $1,600 worth of food each year. Through innovation and hard work, Food Recovery Challenge participants and endorsers have greatly reduced wasted food. Food pantries, food rescue programs, local food banks, soup kitchens and shelters are benefitting from donations of wholesome and nutritious food — helping feed people, not landfills.