SEATTLE – April 18, 2016 – Today, Sea Shepherd Conservation Society launched an Earth Day campaign that it expects to send a wave across social media throughout the week of Earth Day.

To celebrate the importance of protecting our oceans, Sea Shepherd has set a challenge to “make waves” across social media and engage networks of friends across the globe to defend, conserve and protect our oceans.

The “make waves” campaign encourages fans to post a selfie or group photo, waving for our oceans. This gesture will create a global wave of interest across social media to represent the power of the ocean and its importance on the planet. Fans will also be encouraged to spread the wave by nominating friends to continue the chain around the world.

Sea Shepherd founder, Captain Paul Watson said, “The oceans of the world hold over 96% of all the Earth’s water and it is our duty to defend, conserve and protect such a precious part of this planet and the marine life that call our oceans, home. To do this, Sea Shepherd has had to make a few waves over the years. If our oceans die, we all die so Sea Shepherd does not sit quietly on the sidelines. We take direct action to save marine wildlife and our oceans.” 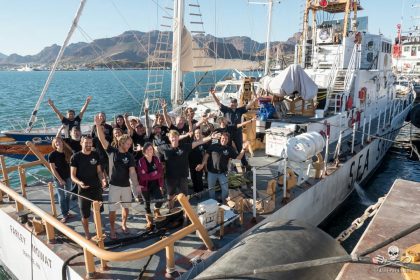 A link to the Sea Shepherd fundraising page will be shared with every nomination on social media. The social media campaign launches April 18th and will run through Earth Day on April 22nd.

Captain Watson added, “This simple salutation of a wave is a universal greeting and also plays on the power of the waves of the ocean which connects countries across the Earth.”

Any funds raised from the Earth Day campaign will go to fund the organization’s vital missions to save our oceans and marine wildlife. Sea Shepherd continues to combat illegal fishing, over-fishing, whaling, sealing, dolphin killing, plastic pollution and preventing the destruction of coral reefs and other oceanic ecosystems.

The organization is currently involved with several campaigns around the globe. Operation Milagro in the Gulf of California is underway to protect the endangered vaquita porpoise, while Sea Shepherd also develops campaigns to protect marine reserves in the Caribbean and the West Coast of Latin America. Sea Shepherd will continue efforts to protect the marine reserves of the Galapagos and intends to address the plight of wild salmon off the coast of British Columbia, while also protecting sea turtles through Operation Jairo. In addition, Sea Shepherd will continue its opposition to the illegal slaughter of pilot whales and dolphins in the Faroe Islands, the slaughter of dolphins in Japan, the Canadian seal hunt and illegal whaling and fishing wherever Sea Shepherd is needed. The organization will additionally focus on campaigns to free captive Orcas and dolphins from captivity.

For more information, fans can visit the Sea Shepherd Conservation Society website on April 18th atwww.seashepherd.org or the organization’s Facebook page atwww.facebook.com/seashepherdconservationsociety to help spread a wave of awareness across social media.