Asheville, NC – In early February, U.S. Senator Susan Collins (R – ME), introduced an biomass amendment to the Energy Modernization Act  of 2015 (S. 2012). For it declares the carbon neutrality of all forest bioenergy. Moreover it also  recognizes biomass as a renewable energy source. This biomass amendment was also passed by a voice vote without discussion.

Specifically, the amendment would require the Departments of Energy, Agriculture, and the Environmental Protection Agency. All to work together. I mean to jointly work together.

For that’s especially so federal policy relating to forest bioenergy is consistent.

That’s across all departments and agencies.

Moreover and that the full benefits of forest biomass for energy. Also for conservation and responsible forest management. This must all be  recognized. Then I know that clear and simple policies must come. All for the utilization of biomass as an energy solution. 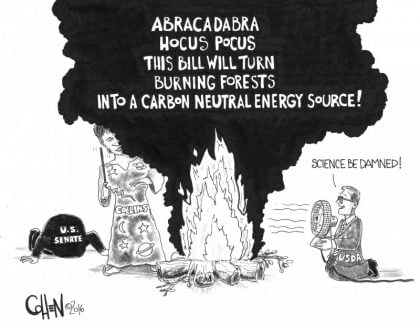 This amendment echoes the principles. I mean ones outlined before. I mean in a June 2015 bipartisan letter. A letter that Senator Collins sent to the Department of Energy. Also the Environmental Protection Agency. Finally, the Department of Agriculture. This letter I leaned was signed by 46 Senators.

Support for the Amendment

Most importantly this amendment is also supported by the

So I have heard that in March 2016 support took a new level. For more than 100 nationally recognized forest scientists. Then also 80 universities too. I mean they all got together. For they wrote to EPA. All stating the long-term carbon benefits of forest bioenergy. This group weighed a comprehensive synthesis. That’s of the best peer-reviewed science. In addition and affirmed the carbon benefits of biomass.

Yet U.S. Senator Susan Collins’ tripartisan biomass amendment happened. For it was cosponsored by Senator Angus King. In addition it was included in the final Energy Policy Modernization Act. One that passed the Senate 85 to 12.