Toyota offers the industry’s largest family of hybrid vehicles, so it’s only natural that it would produce a hybrid that caters to the whole family.

As Green Car Reports adds in their review about it’s newer and tougher looks.

The Prius is no longer as numb and remote to drive as it has been. It’s less Prius-y, more like a regular car… The Prius V is available to lease at $239 per month for 36 months, with $1,999 due at signing and a mileage allowance of 12,000 miles per year.

Zero-percent financing for up to 60 months is also available, with a $1,000 bonus for financing through Toyota Financial.

Buyers in certain regions who currently own a model from the Prius “family” can also get a $500 loyalty bonus, if they finance through Toyota. 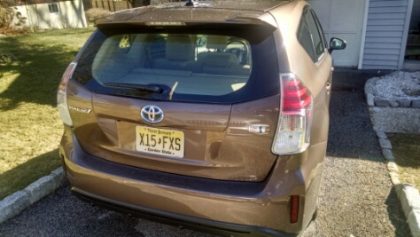 The seating position is higher which gives a better view of the road with crazy ample head- and legroom for five.  When you include plenty of cargo space behind the folding rear seats it’s a big car.  I also like the comfort of an available seat material called SofTex, which parents will like for its spill resistance and ease of cleaning. Soft to the touch, SofTex is lighter than leather, and its manufacturing process generates 99 percent fewer volatile organic compounds (VOCs) than conventional synthetic leather production. 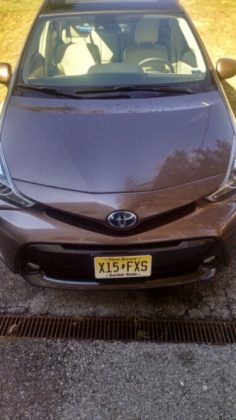 There is plenty and I mean plenty of storage spaces including two glove boxes, a center console storage box and utility tray and five cup holders in large and medium sizes. Bottle holders are built into the front and rear door pockets, and most models feature an overhead storage space suitable for sunglasses. There’s even a compartment under the rear seats designed to store umbrellas. 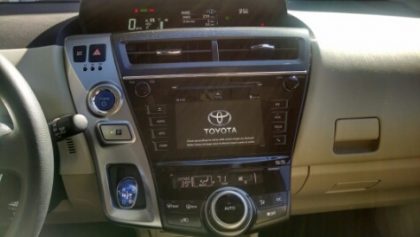 Since the Prius v runs in a pure silent EV mode (except for a high pitch hum), it’s equipped with a Vehicle Proximity Notification System to help alert pedestrians and cyclists as the vehicle approaches.

Hybrid Synergy Drive and Four Driving Modes
The Hybrid Synergy Drive system in the Prius v combines the output of a 1.8-liter Atkinson-cycle, 4-cylinder gasoline engine with a 60kw (80 hp) electric motor that mainly works to power the compact transaxle and another smaller motor that mainly works as the electric power source. Maximum motor drive voltage is 650 volts DC, and energy is stored in a nickel-metal hydride battery pack.

Hybrid Synergy Drive’s 134 system horsepower feels even stronger to the driver due to the unique way the system combines the power of the gasoline engine and electric motor. This series-parallel hybrid system can provide power either from the gas engine alone, the electric motor alone, or a combination of both. 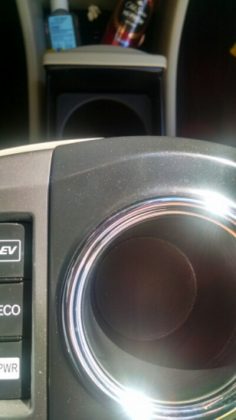 Sleek, Aerodynamic and Efficient
Though larger than the standard Prius, the Prius v has a low 0.29 coefficient of drag.

Even with its family-size capability, the Prius v hasn’t packed on the pounds. On the contrary, clever use of lightweight materials helps make the Prius v agile and easy to maneuver in day-to-day driving. The use of high-tensile grades of steel throughout the body, along with aluminum in key body panels and systems, allowed significantly lighter weight than if using conventional materials. 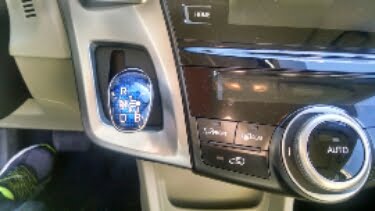 The standard Display Audio System has a 6.1-inch screen and six speakers, and the screen handles multiple jobs: It also serves as a monitor for the car’s energy usage and fuel consumption data and as the monitor for the standard back-up camera. The screen is the user portal with a split-screen feature that allows for simultaneously displaying navigation and audio information. 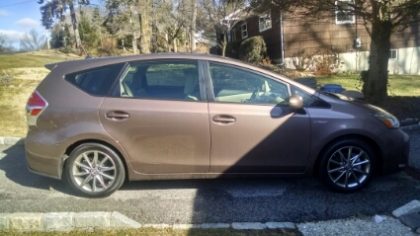 A Toyota-first, the resin Panoramic View Moonroof with power
The retractable sunshades provides an open feeling in the cabin and is 40-percent lighter than a conventional glass roof of similar size.

Automotive Magazine mentioned there are available LED headlights enhance visibility while reducing electric draw and are designed to be virtually maintenance free.