Silver Creek, NE — On Saturday, July 29th, the “Solar XL” project placed its first solar panels along the route of the proposed Keystone XL pipeline. Located on the farm of Nebraska landowners Jim and Chris Carlson near Silver Creek. The Carlsons, who rejected a $307,000 offer from the pipeline company TransCanada to build Keystone XL through their backyard. For they partnered with Bold Nebraska, 350.org, Indigenous Environmental Network, CREDO, and Oil Change International. That’s to put renewable energy directly in the pipeline’s path.

Solar XL underscores the need to center solutions to climate change. All the while rejecting the Keystone XL pipeline and resisting the expansion of the fossil fuel industry.

The Solar XL project is being supported through an ongoing crowdfunding campaign launched earlier this month. The solar panels, which will be installed in at least two other locations. That’s along the pipeline route. For it will serve not only as a form of clean energy. Yet it also will be a symbol of the urgent need for a just transition away from fossil fuels. Especially toward a 100% renewable energy economy. The panels will also help power the homes of Nebraskans resisting Keystone XL. Those are being installed by the family-owned rural solar business, North Star Solar Bears. It’s run by Jim Knopik. 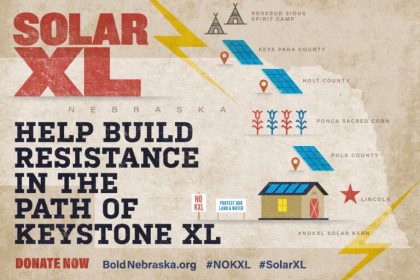 The Keystone XL pipeline would carry 830,000 barrels of dirty tar sands oil a day. That’s from Canada through Montana. Then into South Dakota and Nebraska. Finally, then on to the export market.

The pipeline would also pass through farms. In addition to ranches and Indigenous land. Thereby posing a threat to the Ogallala Aquifer and other water sources. Those that would be contaminated by spills and leaks.

Landowners continue to fight eminent domain for private gain. All knowing this would be the first time the Public Service Commission (PSC) grants those powers to a foreign corporation.

Lastly, all along the route, local economies are connected to agriculture. So given that climate change is a serious issue. I mean Keystone XL would significantly add to climate risks for farmers. Also, ranchers and Tribal Nations.

The first installation took place just over a week before the Nebraska Public Service Commission holds hearings in Lincoln on whether to grant a construction permit for Keystone XL through the state. One day before the hearings on August 6th, people from around Nebraska and surrounding states will converge for a march through the streets of Lincoln urging the Commissioners to reject the permit. If permits are granted for Keystone XL construction in Nebraska, TransCanada will have to tear down homegrown clean energy in order to build, galvanizing people across the country to fight back.

Jim Carlson, Nebraska landowner who placed solar in path of Keystone XL on his family’s farm:

“I am vehemently opposed to the Keystone XL pipeline mainly because of the properties of the contents of the tar sands oil it will carry — this is not your Mother’s crude oil, it is the Devil’s, and it can kill. We must be focused on clean, renewable energy and America can get along just fine without this foul concoction they call bitumen that TransCanada wants to pipe across our precious soil and water.”
Jim Knopik, North Star Solar Bears. LLC:

“Our family-run company is based in Nebraska — and by installing solar projects, like the ones to stop the Keystone XL pipeline — my kids are able to stay on the farm. It’s time for our country to start the transition to clean energy now.”