CORVALLIS, Ore. – The Sierra Club has released its “Cool Schools” rankings based on the ‘greenness’ of participating universities, and Oregon State has the highest green ranking of any public college in the state (private college Lewis & Clark came in 5th). Oregon State is listed as 20th in the nation.

The Cool Schools ranking is open to all four-year undergraduate colleges and universities in the nation. The award honors more than 200 colleges that are helping to solve climate problems. Moreover and making significant efforts to integrate sustainability into their teaching. Also their research and engagement. All to operate sustainably. Evaluations were based on survey information provided by the participating schools. The raw data for scoring came from the Association for the Advancement of Sustainability in Higher Education (AASHE) STARS self-reporting tool. That’s plus a supplemental question about fossil fuel investments. 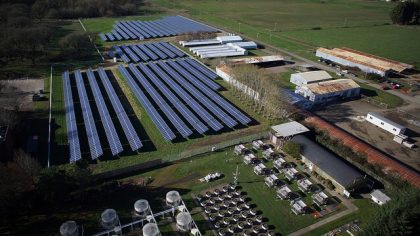 Brandon Trelstad, sustainability officer for Oregon State. For he said that the university’s continued commitment to sustainability has led to a number of honors. All from national organizations over the years.

The Sierra Club noted innovative research at OSU, calling out assistant professor Chad Higgins’ research. That’s into the impact on soil moisture from ground mounted solar panels. Moreover and the benefits of growing food there. Higgins’ preliminary findings indicated a co-benefit for the panels. As well cooler temperatures. All which means more electricity production from the panels.

“Based on my casual summertime observations at our six-acre solar array,” Trelstad said, “it didn’t surprise me that the ground under panels might be good for some food crops. But I was elated to learn that growing crops could also increase solar production. This is the kind of synergy we look for. I mean in sustainability work. When systems thinking and looking for co-benefits across those systems.”