I’ve known Debbie, President at the Environmental Media Association for years. When Debbie went to Standing Rock, we both wanted to tell her story. So here is an exclusive look. All into the Standing Rock protests from a person on the front line. 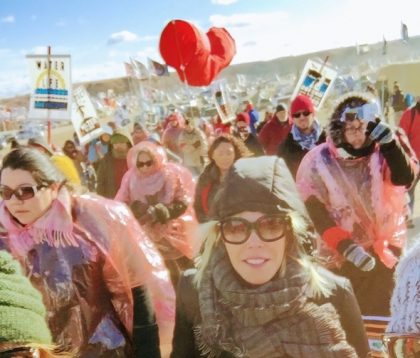 Q – What is Standing Rock? You went there a few weeks ago. Why did you feel you needed to go to the Camp? What was it about this issue that had you on the ground instead of using the media for this issue as EMA usually does

Debbie Levin – I sat on the cold, hard ground with thousands of women, mothers, of all colors and creed… in the freezing cold of North Dakota on the 1806 bridge (over the “line”) with constant threats from the Military that was just on the other side of the menacing tanks blocking the road.

We sat as part of an “action,” daily peaceful protests organized by the Youth and Elders of the Lakota Tribe in a quest to raise awareness and stop construction of the North Dakota Access Pipeline (DAPL).

DAPL wouldn’t only carry hundreds of thousands of barrels of crude oil and destroy sites of sacred significance for the Tribe; but could also lead to serious and dangerous water contamination and greenhouse emissions.

We sat peacefully, using the power of our presence supporting the Lakota Tribe and making the statement: We all have the right to clean water! That’s the moment why I was at Standing Rock.

I’m an activist that believes with all my heart that our loud voices and ability for telling stories. For that’s in the media. Because it is the most powerful tool driving change.

I believe that the sophistication and instantaneity in today’s media landscape can actually inform. Also it can motivate our global community to listen and act. That’s the mission of the EMA. 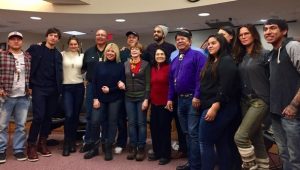 While at Standing Rock I worked with others to help raise awareness of our need to protect both our human rights and access to clean water. I also felt a visceral need to join stand, or in this case sit, in solidarity with this strong and peaceful community. We sat there; mothers, fathers, daughters, sons, brothers, sisters, generations of strangers bound together by our need for unpolluted, non-contaminated water.

As we protested, the media, including two of our EMA Board of Directors, filmed and photographed. We live streamed, tweeted, spoke in press conferences, recruited our EMA talent and board members to follow the leadership of EMA honoree Shailene Woodley. Therefore using their magnified platforms amplifying the powerful voice of the Tribe.

So yes, we did join this historic fight with our boots on the ground. Plus we brought the ability to help combine media exposure. Therefore celebrity engagement and community action to help drive change.

Q- How did EMA become involved in this issue

Debbie Levin – In October 2017, EMA honored Shailene Woodley for her dogged commitment to the environment. Her simple, powerful and emotional acceptance speech at the EMA Awards touched millions of people through social channels and media amplification. Shailene touched me.

When she said I needed to go to Standing Rock, I knew she was right. A couple of weeks later, there I was in North Dakota along with EMA Board Members, Frances Fisher, John Quigley, Ray Halbritter (CEO and representative of the Oneida Nation), Shailene (and her rockstar mom, Lori), Bryn Mooser (Co-Founder of Ryot), Vicki Benjamin representing our wonderful sponsor Calvert Investments and just missing Daryl Hannah and Neil Young’s visit.

In conclusion, Josh Fox had just left and Ian Somerhalder and Nikki Reed would be headed to Standing Rock in the following days. Mark Ruffalo joined us in the next day. With camera drones and crew, Bryn live streamed the event via his wide reaching media company Ryot. One now owned by the Huffington Post. Calvert Investments spoke about the power of investing responsibly.

In addition, Frances called upon her friends across the entertainment industry to join her quest. Ray brought his quiet strength and command, representing the important Oneida Nation. He came with family and friends and we offered support to this proud and strong Tribe: which has become the symbol of a people that have been marginalized. Their rights ignored. We all offered what we could. 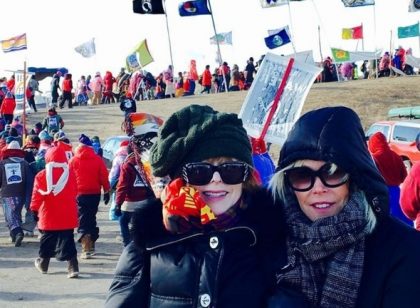 Many from our EMA team, along with thousands of others from across the country. For they stayed, came and returned. Frances, Shailene, Lori, Josh were joined by many of our entertainment industry icons including Jane Fonda, Patricia Arquette and many more for the Thanksgiving holiday to cook and serve the “Camp” and to keep the noise going.

Whether we were sitting on the bridge or supporting from Los Angeles, EMA tries to keep the messages of strength, action, and resilience, exemplified each day by the Tribe and the “water protectors” who have joined them, moving forward.

I believe with all my heart that our voices can be heard. With specific and clear messaging in the media and authentic celebrity voices, the issues will be understood and behavior will adapt. Not only because the construction of DAPL through this sacred land is an injustice to the environment and the Sioux Tribe, but also since every Native American that hasn’t had “a voice” or the dignity of respected property ownership and their rights for hundreds and hundreds of years deserves this and more.

Q –There’s obviously been a huge win for Standing Rock and the Standing Rock Sioux Tribe with the easement across Lake Oahe denied for the proposed Dakota Access Pipeline!

Debbie Levin – They did! This Sunday, there was a reprieve when the US Army Corps of Engineers declared they wouldn’t grant an easement to cross Lake Oahe for the proposed DAPL. Instead, they must conduct an environmental impact report to consider alternate options for construction.

There was also definitely elation for this great victory. I mean for the Tribe and millions of people who used their voices. It was a victory but a temporary victory. The voices of the Lakota Tribe were also clearly heard.

But while this was a win and we are grateful to the Army Corp of Engineers and the Administration. As well as, the Energy Transfer Partners and Sunoco Logistics. They stated in a Dec 4 release the following: “the corporations remain, ‘fully committed to insuring that this vital project is brought to completion. As well as to fully expect to complete construction of the pipeline without any additional re-routing in and around Lake Oahe. Nothing this administration has done today changes that in any way.”

EMA’s mission has always been to be the megaphone and tell the story. We will continue this fight.

Q – So it was a peaceful protest? We heard about violence from the general news outlets.

Debbie Levin – From my time at Standing Rock, I can confirm that this is a protest rooted in love and executed peacefully with full Native American traditions. The Tribe has an unwavering commitment to remaining peaceful and, despite violent retaliations by authorities, they have maintained this commitment. In just the short time I was there I felt the power of that commitment and I also felt fear. There was a sense of “what are they gonna do to us?,” but even when I felt scared, the Tribe bravely led everyone forward.

They also combated the police’s violence with dignity. For they also pushed each supporter to do the same. One of the most violent attacks against the Water Protectors occurred the Sunday.

All before Thanksgiving, the day after I left.

I had been “over the line” participating in a peaceful action not 24 hours earlier. That evening, violence broke out. The Water Protectors also faced mace bombs and water hoses. All in the freezing temperatures. But once again, the Tribe fought rubber bullets with human decency. For they drowned out tear gas with beautiful chants. As well as drums and the hypnotic sent of sage and rosemary.

Q – What is EMA doing that we can support?

Debbie Levin – We are armed with a Board full of celebrity voices that are anxious to tell this story and make sure not only Standing Rock, but all Native land is protected, held with the same care and respect that all citizens of the world should expect. Clean water, soil that has not been poisoned, peace that begets peace—we are committed to protecting our environment. At EMA, we are over 100 million “followers” strong. Multiply that with all the reposts and reposts and reposts. Our power is in our voice. EMA is an organization that understands a unified message. You can follow us on social media, commit to ensuring you hear the real story and we promise to continue to connect our supporters with clear calls to action and educational tools to understand the truth—whether at Standing Rock or other initiatives to protect our environment worldwide.

You can support by joining, spreading the message and supporting our Native American brothers and sisters with love and acknowledgement that we all should expect.

Debbie Levin – Contact EMA and we’ll guide you to the most up to date and effective websites. As I said, though last Sunday marked a monumental moment in this movement, this fight is not over. Whether it’s supplies, funds or the much needed financial support for the massive lawsuits that have been incurred, we’ll direct you. www.green4ema.org