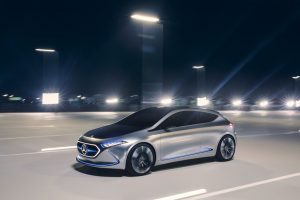 ‘IT IS GREAT NEWS TO SEE A NAME LIKE MERCEDES-BENZ INCREASE ITS TIES WITH THE SERIES TO SHOWCASE THEIR NEW EQ BRAND AHEAD OF ENTERING FORMULA E AS A COMPETITOR IN SEASON SIX.’

LONDON, UK (March 29, 2018) – Mercedes EQ is the new product and technology brand. It’s Mercedes brand for electric mobility. It has teamed-up with Formula E as a sponsor for the European leg of the 2017/18 ABB FIA Formula E Championship, starting from the next event as the presenting partner of the inaugural race in Rome on April 14.

The EQ brand or Mercedes Brand for Electromobility will sponsor all four races across Europe. This season includes Rome, Paris, Berlin and Zürich. As well, putting its name to the first-ever race on the streets of the Italian capital. Hence, titled the CBMM Niobium Rome E-Prix presented by Mercedes EQ.

So Talk about the Mercedes brand for electromobility moving up a notch.

In conclusion and in addition to being the presenting partner in the Eternal City, Mercedes EQ will also feature as an official partner for the Julius Baer Zürich E-Prix on June 10. That’s where Formula E will once again make history by bringing circuit racing back to Switzerland. This is for the first time in over six decades.