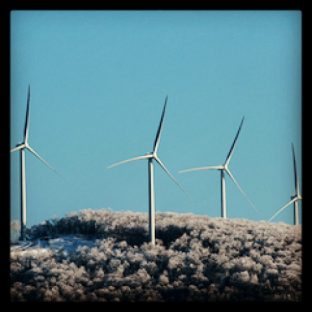 According to Green Energy Times,

The energy from the project in Milton and Georgia Vermont is providing approximately 8 percent of Burlington Electric Department’s (BED) energy demand. All through a long-term stably priced contract.

When the project was commissioned late 2012, Burlington Electric Department General Manager Barbara Grimes commented, “This project fits perfectly into BED’s sustainability goals. We are moving toward a 100 percent renewable power portfolio. Also we like power close to home so that these dollars recirculate in the economy.  Projects such as Georgia Mountain Community Wind are pro-environment and pro-economy.”

Now recently brought to light to Green Living Guy but the farm was purchased after 5 years of operation. It was bought by Greenbacker Capital/Renewable Energy.

In conclusion, the energy generating is about 8 percent of Burlington energy. For that’s according to the Electric Department’s (BED) electricity demand. Most noteworthy it’s through a long-term stably priced contract.