CNN Digital reporter John Sutter did on his climate change project called “2 Degrees”. It seems it’s a number that Scientists and economists say that we can’t pass. So if the climate warms more than 2 degrees Celsius, will greatly up the odds of climate catastrophe.

When he launched this project in April, he asked what readers were most interested in reading about — and they chose how 2 Degrees could affect climate refugees from a disappearing cost. After searching for a country that met the criteria, Sutter traveled to the Marshall Islands and spent 9 days there learning about how the Marshallese were affected by the rising sea and their disappearing coast. 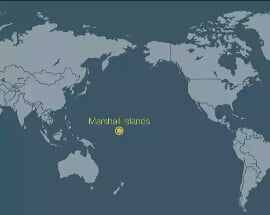 In conclusion, he’s laid out a multi-part narrative with photos and videos. It’s a narrative that tells the heartbreaking story of the inhabitants of this Island. As well as and 15% of the population – 10,000.

Finally, all of those 10,000 have relocated to northwest Arkansas.