It’s no longer a question of if, but when. When businesses and government will transition to LED. Even Super Bowl now since 2015 being lit with LED technology. I thought you may be interested in a new case study on how Cree LED lighting is helping one business improve its operations and economics across the board.

Consequently, energy represents 30 percent of a typical gas station’s costs. Also is a property’s single largest operating expense. Not to mention that high-quality illumination can help distinguish one facility from its competition.

So by upgrading their light fixtures to Cree LED luminaires, 4 Sons Food Stores, Inc. was able to cut each of its 21 store’s energy bill by about a third. Thereby saving thousands on maintenance costs.

Additionally, each location was able to secure between $8,000 to $16,000 in utility rebates thanks to Cree’s high quality solutions. That one-for-one replacement to maintain compliance. 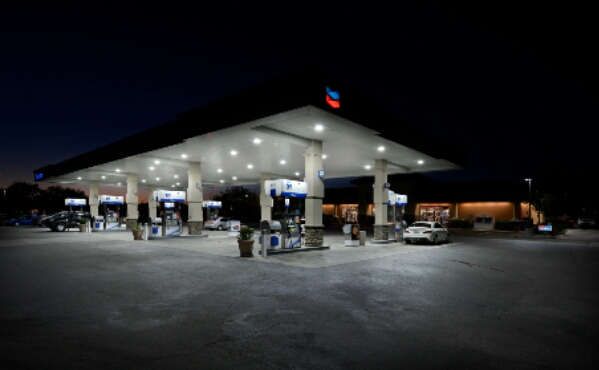 In conclusion, the full case study is attached.

Finally, Cree helps organizations. That’s from gas stations to hospitals. They clearly are approaching a zero-energy business. Furthermore and improving their environments with LED lighting.

One way the United States could slash its electricity use, dependence on fossil fuels and emissions of heat-trapping gases is really quite simple: better light bulbs. The Department of Energy is backing research and development aimed at getting light-emitting diodes into common use in homes and businesses at a price that saves money. Hurdles remain: Costs are still high, the quality of what’s on the market varies and not all the technical issues have been worked out. Energy experts are confident, however, that this new lighting is the future and that energy savings will be enormous.

Lighting consumes 22 percent of electricity in the United States. The DOE predicts that solid-state lighting. All which uses semiconducting materials to convert electricity into light, and includes LEDs — has the potential to reduce energy use for lighting by one-third by 2030. That’s the equivalent of saving the output of 40 large (1,000-megawatt) power plants, the greenhouse gas emissions of 47 million cars and $30 billion.