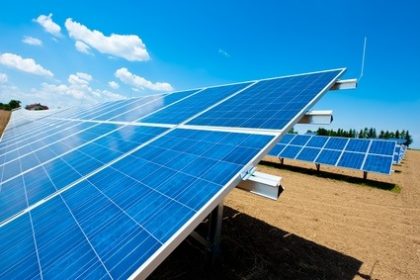 The godfather of electricity, Thomas Edison, endorsed solar power work shortly before his death in 1931. According to the New York Times, Edison told friends Henry Ford and Harvey Firestone, “I’d put my money on the sun and solar energy. What a source of power! I hope we don’t have to wait until oil and coal run out before we tackle that.” We are getting closer to fully realizing his wish:

Despite the monumental drop in prices, solar panels are still expensive. But the savings in energy costs and the positive environmental impact are undeniable. A little knowledge about how solar power works can go a long way. All in helping you build a system that is practical and affordable for your home.

Electricity is best described with a water analogy. Direct current (DC) results from water rapidly moving through a circular tunnel in the same direction, whereas alternating current (AC) results from the back-and-forth movement of water in the same tunnel.

Solar cells produce current by absorbing the photons emitted from the sun via silicon receptors. These photons act like a cue ball in pool, knocking free electrons from the silicon. The electrons are then herded by creating positive and negative silicon particles that form the current (amperes) necessary to produce power.

The average annual residential usage of electricity in 2012 was about 900 kilowatt-hours per month, the U.S. Energy Information Administration reports. Assuming you get six solid hours of sunlight per day, you’ll need approximately 5,000 watts’ worth of solar panels. A system this size would cost well over $15,000 for parts and installation, but you don’t necessary have to get it all at once. You could purchase a smaller system to power certain appliances, like your refrigerator and water heater. This could easily cut your monthly electric bill by 20 percent or more. EarthEasy has more information about DIY home solar power.

Leasing solar panels is much like getting cable or satellite TV service. You will lease the equipment from the company and say a specified amount for the service each month. The difference here is that many solar companies lock you into 20-year (or more) contracts. The good news here is that the company is responsible for maintenance and repairs, unlike when you own the system outright.
It makes more sense to pay for the system in cash to start realizing the savings immediately, but unless you’re wealthy, this requires financing. Some people use a credit card, and others get a home equity loan or some type of personal loan. Some cash out 401(k) plans, while others sell future structured settlement payments for a lump sum of cash. J.G. Wentworth has more information about selling your future payments. No matter how you finance your solar purchase, make certain you get multiple quotes to maximize savings.

Invest in Your Home

Whether you lease, buy or only install a partial system, solar power will work and increase the value of your home. A Wells Fargo/Journal of Appraisers study found that solar increases the average home value by 3-4 percent. A 5,000-watt system is said to instantly add $9,000 in equity to most homes, which amounts to an almost-instant return on your investment. Solar World Online has a list of 2013’s top solar contractors.