For starters, here’s another example of RENEWABLE energy winning the day. So a project in Australia’s largest grape growing region. It is giving struggling vignerons a sunny alternative.

The Riverland is about 250km east of the South Australian capital Adelaide and stretches for 120km along the banks of Australia’s biggest river, the Murray. 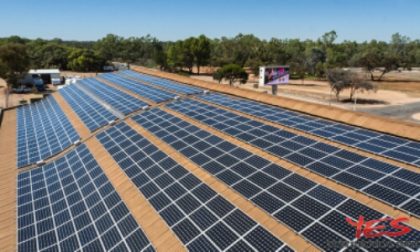 Renmark–based Yates Electrical Services began its Red Mud project this year and has been running a 180kw test site for about three months.

The project ultimately aims to work with landowners to set up 100kw-200kw solar farms and sell the energy to the national electricity grid through the spot market.

Managing Director Mark Yates said under the Red Mud project, landowners could lease their land to be used for a solar farm. Then they can lease the land and buy into a portion of the farm. As well as choose to own the entire solar farm outright.

He said the test site had shown that a 10 per cent return on investment per year was achievable.

“Red Mud is something that we dreamt up to be a lot more scalable to people locally. That’s as opposed to big superannuation funds or merchant banks investing in massive projects,” Yates said.

“So Effectively with Red Mud everything the site generates in the form of energy is sellable. As well as Large Generation Certificates are retained locally in the community.”