LOS ANGELES, Nov. 17, 2019 – For the first time in 55 years, Ford is expanding the Mustang family. It’s bringing the famous pony into the electric age with Mustang Mach-E. Yes folks,an all-new, all-electric SUV. All born of the same all-American ideals that inspired the best-selling sports coupe in the world.

The original Mustang took the world by storm in 1964. Most noteworthy it quickly came to represent the best of the American spirit. That mantra equals Freedom, progress and fast performance.  Can we say a touch of rebellion!!

Now, the electric Mustang is reimagining these ideas for a powerful electric future. All with space for customers’ growing needs. I mean that’s those advanced over-the-air updates. Those updating and that continually improving  the vehicle. 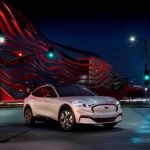 This vehicle is being developed and designed in a century-old brick building. I think I’ve been in it. It’s located from what I remember, a few blocks away from Henry Ford’s first factory in Detroit. I’ll have pictures for another story.

However and Now, Ford is bringing the Mustang Mach-E to life. All through a development process. A process concentrating entirely on customer needs and desires. All resulting in a sleek, beautiful looking SUV. It’s also delivering the torque and handling. All because it’s including state-of-the-art connected vehicle technology. Now that making the Mach-E even better over time. Kind of like your cellphone. 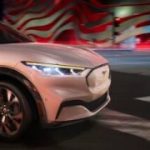 Now with an extended-range all-wheel-drive configuration, the Mach-E is targeting 332 horsepower and 417 lb.-ft. of torque2. .

All with the standard all-wheel-drive variation. That’s targeting quicker times to 60 mph. Even better than the base Porsche Macan series.3

That’s making it faster off the line than a Porsche Macan Turbo3. What?! The GT Performance Edition, meanwhile, is targeting a comparable 0-60 mph in the mid-3-second range. That’s most importantly compatible to a Porsche 911 GTS.3 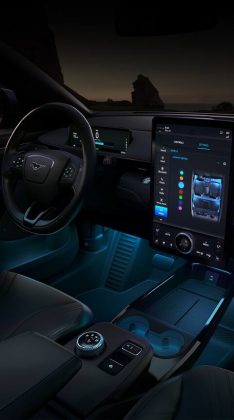 Most importantly, a limited First Edition is available in extended-range all-wheel drive. Yet other bling I mean I included those red painted brake calipers, metallic pedal covers, contrasting seat stitching and a scuff plate marked First Edition. Those Mustang drivers looking for the thrill of the Mach-E GT making reservations now. Finally, deliveries starting in spring 2021.

In addition to blistering acceleration, Mustang Mach-E is available with Brembo’s all-new performance Flexira aluminum calipers. These maintain the functionality of a fixed caliper. All the while being designed with the dimensions of a floating caliper.

The GT Performance Edition is equipped with a MagneRide® damping system. In addition an adaptive suspension technology. That’s letting drivers hug the road. Then all the while delivering an exciting, comfortable ride. Let’s also not forget the batteries in the center including a strong center of gravity!

For example, expect sportier steering controls. In addition that ambient lighting and sounds tuned.  Thereby providing an authentic all-electric experience. Finally, a dynamic cluster including animations that are tied to driving behavior. 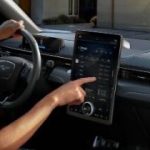 When the vehicle launches oh boy. I mean an electric new Mach-E 4 with a Rivian drivetrain with that all-wheel drive system available. We are talking 100% torque at zero RPM. That’s because those are the rules of electric cars. Period.

So one applying torque independently to the front and rear axles to deliver impressive acceleration. Most importantly for Ford to say “improved handling over the rear-wheel drive model.”

Ford also tuned this system to provide excellent traction on the road. Thereby rigorously testing the vehicle in wet and snowy terrain to help control for slippery conditions. Mach-E is the first production vehicle to be tuned by the Ford Performance team utilizing Ford’s racing simulator in North Carolina.

Seamless technology that easily adapts to your lifestyle

Making its debut in the Mach-E is the next-generation SYNC® communications and entertainment system. So this is a sleek and modern interface using AI. Yes folks artificial intelligence learning to quickly understand their drivers’ preferences.

It gets even better over time. Especially thanks to advanced over-the-air updates. Because next-generation SYNC’s 15.5-inch screen and simple interface ditches complicated menus. We mean making it easier to access features. Bringing you access with touch, swipe and pinch controls. Those that every smartphone owner is comfortable using. 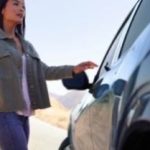 Everywhere inside, the Mach-E represents a fusion of sleek, modern design and smart functionality. Premium available Bang & Olufsen speakers are seamlessly integrated across the front, floating above the air vents like a sound bar. A floating flip-up armrest doubles as a place to store purses or bags.

Traditional Mustang design cues like the double-cowl instrument panel round out the interior. 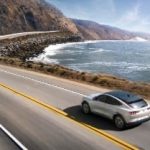 Even the available panoramic fixed-glass roof has a secret – a special glass coating with infrared protection helps the interior stay cooler in the summer and warmer in the winter. In addition, an inner layer between the glass helps protect against UV rays.

Finally, getting in and starting the vehicle is easy and effortless with Phone As A Key technology6, which makes its debut in the Ford brand lineup in Mustang Mach-E. Using Bluetooth, the vehicle can detect customers’ smartphones as they approach, unlocking the Mach-E and allowing them to start driving without getting their phones out of their pockets or using a key fob. A backup code can be entered on the center touch screen to start and drive the vehicle in the event a phone battery dies. 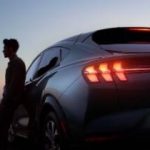 Mustang Mach-E will be available in both standard-range (75.7 kWh lithium-ion battery) and extended-range (98.8 kWh battery), which has a targeted EPA-estimated range of at least 300 miles in rear-wheel-drive configuration.1

So these advanced batteries feature 288 lithium-ion cells in the standard-range version. As well, there are 376 lithium-ion cells in the extended-range. This all electric Mustang is designed for ease of manufacturing. Because the battery is located on the floor between the vehicle’s two axles. Also, tested at temperatures as extreme as minus 40 degrees Fahrenheit.

Most importantly, the batteries are secured inside a waterproof battery case. Then it’s surrounded by crash-absorption protection. They are liquid-cooled to optimize performance in extreme weather and to improve charging times.

The connected navigation system will identify up-to-date public charging locations during trips and prompt owners to charge at the most convenient points on each drive – all to help ensure they don’t have to be anxious about how much range they have.7 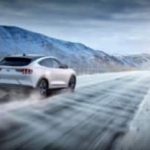 Ford has more than 2,100 EV-certified Ford dealers and more than 3,500 EV-trained technicians to support customers nationwide.