A report released identifies 13 of the most vulnerable places in the Arctic Ocean that should be considered for protection. Because as every summer sea ice melts and industrial activity expands we get further into newly accessible areas.

The report releasing from the Natural Resources Defense Council and the International Union for Conservation of Nature. This report offering the first-ever Arctic-wide identification of losing ice. Especially in areas most important to Arctic marine life and vulnerable to additional stress.  Because on top of global warming, loss of sea ice and ocean acidification.

In the U.S., the Bering Strait, Chukchi Beaufort Coast in Alaska, and St. Lawrence Island made the list of 13 top priority areas. 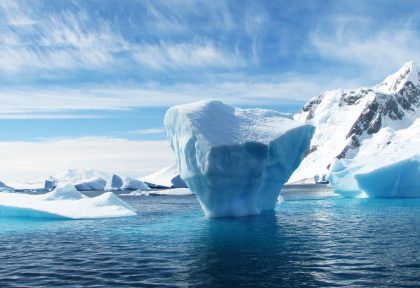 and the Great Siberian Polynya (off Norway and the Russian Federation).

The areas identified in the report are therefore particularly unique or rare. They contain most importantly threatened, endangered or declining species and/or habitats. Worst part is they are especially vulnerable, fragile, sensitive, or slow to recover. As well as meet other internationally recognized criteria. They therefore represent top priorities in a subset of 77 total Arctic areas. ALL consequently that should be considered for protection.

The Arctic Ocean also supports a unique array of polar-adapted wildlife. That’s as a result from polar bears to whales, seals, walruses and sea birds. Many of the four million people residing in the Arctic rely on these animals. All for nutritional and cultural sustenance.

As the Arctic warms, industrial activities such as shipping, fishing, and oil and gas exploration are expanding into ocean places. Most importantly in places that were previously inaccessible. Especially in area that have the year round presence of sea ice. Now this adds stress to a region already facing environmental pressures. All consequently due to the impacts of climate change.

Also receiving an honorary mention in the report were the unique features of the High Seas of the Central Arctic Ocean. Now that’s an area of international waters at the top of the world. I mean where marine life survives in an extreme environment of cold and darkness. This is outside of any country’s jurisdiction. Globally unique therefore the high seas of the Central Arctic may be exceedingly vulnerable. Most importantly and worst part: plus slow to recover.

The report also reflects the findings of leading scientists. In addition to representatives of indigenous communities in Arctic countries. All consequently who gathered at a Scripps Institution of Oceanography workshop last fall.

Though scientists tend to agree that summer ice at the North Pole will eventually disappear. It seems to have happened yet they haven’t settled on a date. And one group now claims to have evidence that Santa may have to start swimming much sooner than we thought.

For more information, you can find the full report online here: http://docs.nrdc.org/oceans/files/oce_11042501a.pdf.

Sea ice is an important component of the global climate system. As well as a key indicator of climate change. Now there is a decreasing trend in Arctic sea-ice concentration. It is evident in recent years, whereas Antarctic sea-ice concentration exhibits a generally increasing trend. Various studies have investigated the underlying causes of the observed trends for each region. However possible linkages between the regional trends have not been studied.

Here, they hypothesize that the opposite trends in Arctic and Antarctic sea-ice concentration are linked. I mean at least partially, through interdecadal variability of the Pacific Decadal Oscillation (PDO). As well as the Atlantic Multidecadal Oscillation (AMO).

Although evaluation of this hypothesis is constrained. Especially by the limitations of the sea-ice cover record. That’s because preliminary statistical analyses of one short-term and two long-term time series. Both were observed and reanalyzed sea-ice concentrations. This data suggest the possibility of the hypothesized linkages.

In contrast to the declining trends in Arctic sea ice, Antarctic sea-ice cover has exhibited an overall increasing trend in the past few decades3,4, except for the Bellingshausen and Amundsen Seas region where there has been a significant decrease21.

So although some suggested that stratospheric ozone depletion that strengthened cyclonic circulation over Antarctica contributed to the Antarctic sea ice expansion22.

However several studies have linked the increasing Antarctic sea ice cover to internally generated variability forced from the tropical Pacific that deepened the Amundsen Sea Low23,24,25,26,27,28,29.

With all this back and forth, recent research shows that AMO also is an important factor leading to the complex distribution of Antarctic sea ice30,31,32,33.

In addition, a recent study found that the trends in Antarctic sea-ice cover are partly forced by sea-surface temperature anomalies in the north and tropical Atlantic. That’s through changes in the global thermohaline circulation and sea-level change31,33. 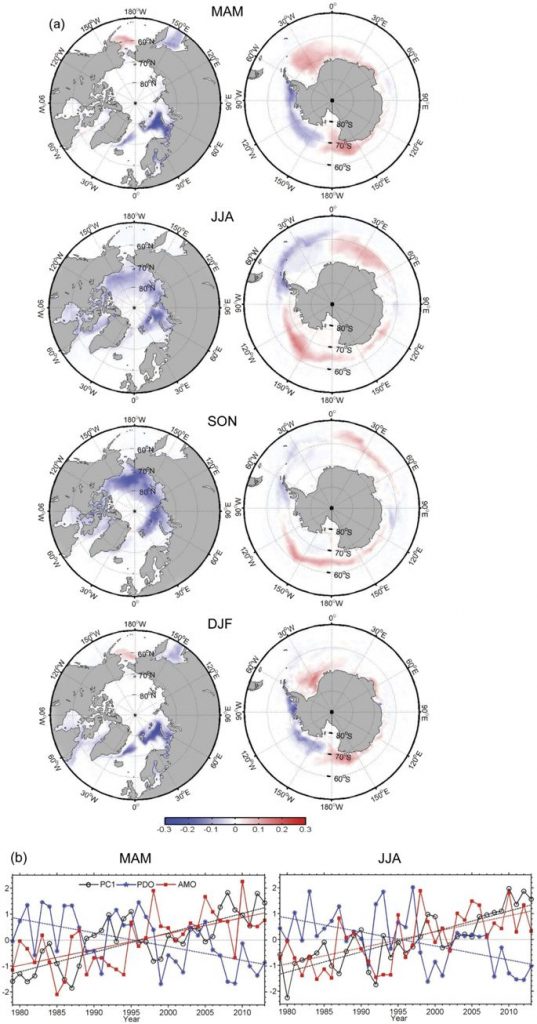 In conclusion and another potential mechanism for the Antarctic sea-ice expansion is that increased mass loss of the Antarctic ice sheet. All due to increasing ocean warming and subsurface ice-shelf melting. This causes the uppermost ocean layer to become fresher. So its less dense therefore than the underlying warmer water. Then this decreases upward ocean heat transport.

Finally, and according to the US Climate Resiliency Toolkit, yes fact is the upper ocean layer can then cool more rapidly in the autumn and early winter. Then leading to the sea-ice expansion34. HOWEVER!!

The Arctic Ocean is blanketed by seasonal sea ice that expands during the frigid Arctic winter, reaching a maximum average extent each March. Sea ice retreats during the Northern Hemisphere’s summer, reaching its minimum extent for the year every September. Arctic ice cover plays an important role in maintaining Earth’s temperature—the shiny white ice reflects light and the net heat that the ocean would otherwise absorb, keeping the Northern Hemisphere cool.

Arctic sea ice is declining at an increasing rate in all months of the year, with a stronger decline in summer months. Researchers who study climate and sea ice expect that, at some point, the Arctic Ocean will lose virtually all of its late summer ice cover. A robust range of evidence suggests that Arctic sea ice is declining due to climate warming related to the increased abundance of heat-trapping (greenhouse) gases in the atmosphere from human burning of coal, oil, and gas. Because greenhouse gases stay in the atmosphere for multiple decades, scientists do not expect any reversal in the downward trend in ice extent.