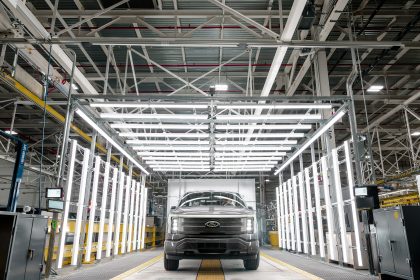 F-150 Lightning trucks are now being built for customers across America. F-150 Lightning is the fastest-accelerating F-150 yet and the only full-size electric pickup available now with a starting price of less than $40,000.

Built at the ultra-modern Rouge Electric Vehicle Center within Ford’s historic Rouge Complex, F-150 Lightning is the only electric vehicle that is Built by Ford Tough. Ford F-Series has been America’s best-selling truck for 45 years in a row[1] and is second only to the iPhone in revenue among all American consumer products, according to a 2020 study.

“Today we celebrate the Model T moment for the 21st Century at the Rouge Electric Vehicle Center,” said Ford Executive Chair Bill Ford. “The Rouge is where Ford perfected the moving assembly line, making it a fitting backdrop as we make history again. The stunning anticipation for F-150 Lightning is a credit to the work of our Ford engineers and designers. Also, the UAW team members who are building these trucks with pride.”

Ford has unprecedented demand for the F-150 Lightning with 200,000 reservations. The company is also expanding the Rouge Electric Vehicle Center. The goal is to ramp up production to a planned annual run rate of 150,000 in 2023. The company has invested a total of $950 million and created 750 jobs at the Rouge Electric Vehicle Center. Ford’s investment in Michigan for F-150 Lightning alone now totals more than $1 billion, with 1,700 recently created jobs spread among five Ford plants in the state, including Van Dyke Electric Powertrain Center, where Lightning electric motors and electric transaxles are assembled, and Rawsonville Components Plant, where Lightning batteries are assembled. 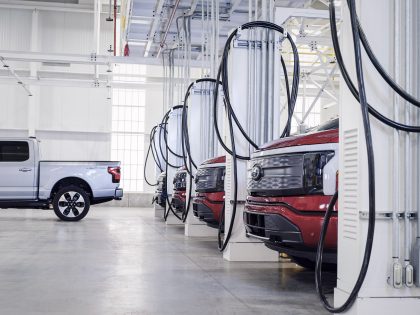 “America’s real transition to electric vehicles starts now,” said Ford President and CEO Jim Farley. “F-150 Lightning is just the beginning of our ambitions for growth and leadership in digital, electric vehicles. We continue to expand our EV manufacturing footprint across the U.S., including the start of site preparation at BlueOval City, which will enable us to meet the ever-increasing customer demand for our exciting EV line-up.”

Ford is on track to deliver more than 2 million electric vehicles annually by 2026. That’s equal to about one-third of the company’s global volume. It’s on the way to 50% by 2030.

It accelerates from zero to 60 mph in the mid-4 second range with the extended-range battery. It’s the freedom of a 10-kilowatt smart power plant on wheels. The F-150 has a starting price less than $40,000 before available tax credits. That’s also in addition to software updates that will make it even better over time. It’s definitely attracting new customers to Ford. Full three-quarters of reservation holders do not currently own or lease a Ford vehicle. F-150 Lightning is also converting many of them to first-time truck or electric vehicle buyers.