Chevrolet is stepping up the national rollout of the Volt to match customer interest.

“We’re accelerating our launch plan to have Volts in all participating Chevrolet dealerships in every single state in the union by the end of this year,” said Rick Scheidt, U.S. vice president, Chevrolet Marketing. “This is the right thing to do for our customers and our dealers who are seeing increased traffic onto their showroom floors.”

Chevrolet Volts have been delivered to customers in the Washington D.C. area, as well as California, New York, Connecticut, New Jersey and Texas.

The decision to accelerate the national rollout was influenced by Chevrolet dealers like Criswell Chevrolet in Gaithersburg, Md., which has seen a surge of consumers interested in the Volt. 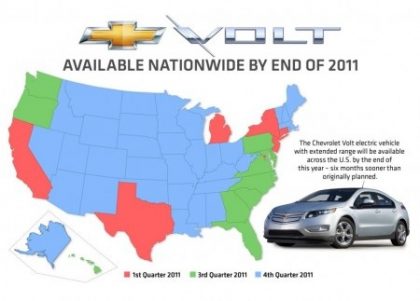 “The Volt is clearly bringing new customers to Chevrolet,” said Harry E. Criswell III, president and owner of Criswell Chevrolet “We are seeing 10 to 15 customers a week who are seriously considering buying a Volt. Many of them own competitive brands and now have a Chevy on their shopping list because of the Volt.”

Some of that consumer interest has been fueled by prestigious industry awards and recognitions for the Volt, including:

“Such recognition provides customers with credible, expert endorsement of new models, which is important for vehicles like the Volt that feature significant new technologies,” said Scheidt. “Based on the awards the Volt has received, and the number of consumers expressing interest in the technology, we believe the Volt is the right car at the right time.”

The Volt is an electric vehicle that offers a total driving range of up to 379 miles. For the first 35 miles, the Volt is all EV.  When the Volt’s battery runs low, a gas-powered engine/generator seamlessly operates to extend the driving range another 344 miles on a full tank.