Monaco – May 29, 2011: Visitors to the world’s most prestigious motorsport event, the Formula One Monaco Grand Prix, were among the first to see the first Fisker Karma off the production line put through its paces as it made its European driving debut on the famous street circuit.

On Saturday 28 May 2011, before official race qualifying began, the first European production version of the Fisker Karma, the world’s first true Electric Vehicle with extended range, took to the streets of Monaco, completing a couple of laps.

The vehicle was piloted by Albert II, Sovereign Prince of Monaco.

His Serene Highness was joined during this momentous occasion by company co-founder, CEO and executive design director, Henrik Fisker. This event marked the first dynamic, public showing of the Karma in Europe. 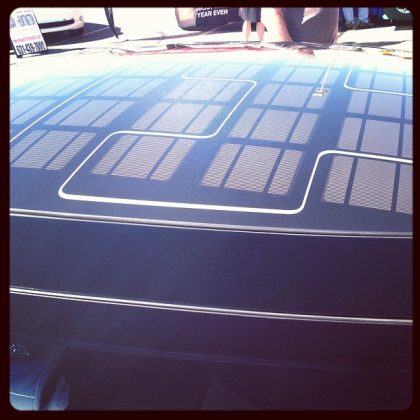 Designed to reflect Henrik’s paradigm of Responsible Luxury™, the Fisker Karma is the first American-designed and engineered luxury vehicle specifically developed to appeal to world markets. It is the only luxury sedan in the world that meets future fuel consumption and emission requirements, making it suitable for any international city.

The Karma was also on static display during the race weekend.

That’s both at the chicane exiting the tunnel, turns 10 and 11, otherwise known as the Nouvelle Chicane, and thereafter in Cavallari – Monaco Motors, Fisker’s newest dealership, located on 6- 11 rue Princesse Florestine, MC 98000.

The only true Electric Vehicle with extended range, the Fisker Karma drives its rear wheels using two rear-mounted 201.5 horsepower (150 kW) electric traction motors that draw energy from the lithium-ion battery pack for up to 50 miles (80 km). The gasoline engine drives a 175 kW electric generator to power the motors; there is no mechanical link between this engine and the drive motors.

Uniquely, the Fisker Karma can run in one of two drive modes: Stealth and Sport.

In all aspects of performance, the Fisker Karma is designed to be a true driver’s car.

Its proprietary, advanced aluminum space frame incorporates new levels of rigidity and strength. One that give the Karma world-class ride and handling characteristics. Fisker Automotive’s engineering team designed the Karma’s space frame. All around the car’s unique powertrain, filing for multiple patents in the process.

Benefitting from a four-wheel independent SLA (double-wishbone) suspension. In addition and also employing aluminum components. So the Karma has been specifically tuned to run on standard 22-inch aluminum wheels. It’s a first for a production car.

Production of the Fisker Karma recently started at Valmet Automotive’s Uusikaupunki facility in Finland. All with Fisker aiming to achieve full build rate by the second half of 2011. It is Fisker’s plan to deliver vehicles to all current deposit holders during the 2011 model year.