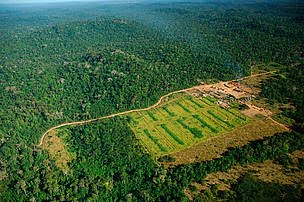 Brazil’s Congress passed legislation recently that strips the Amazon and other key regions of critical environmental protections, and grants amnesty to individuals accused of past illegal deforestation.

WWF condemns the new Forest Code bill, driven by retrograde sectors of Brazil’s powerful agribusiness industry, for its failure to account for severe social and environmental costs. Since 2006, Brazil has demonstrated that it can dramatically reduce its rate of deforestation while increasing agricultural production and reducing poverty. This bill threatens hard-won gains for both the environment and Brazilian society.

The bill now goes before President Dilma Rousseff, who will have 15 days to decide whether or not to sign it into national law or apply veto power to the full text or parts of it.

“President Rousseff made a promise that she would not tolerate laws promoting new waves of deforestation or amnesty for past forest crimes. She knows these changes are bad for Brazil and bad for the environment. We ask her to uphold her promises,” said Maria Cecilia Wey de Brito, CEO of WWF-Brazil.

The proposed amnesties would not only free environmental criminals from prosecution, but also forfeit an estimated US$4.8 billion in fines.

“WWF looks to President Rousseff to resist the short-sighted and senseless reform to the forest law that has been passed by the Brazilian House of Representatives today,” said Jim Leape, Director General of WWF International.

“In a year that will see world political, business and civil society leaders gather in Rio de Janeiro for the UN Summit on Sustainable Development, it would be a shame indeed for Brazil to surrender its position as a global leader in forest conservation. I urge the president to vigorously resist the most egregious elements of the new law, for the future of Brazil’s economy, its natural heritage and its people,” said Leape.

WWF has highlighted the worst impacts of the proposed forest law reform, as well as viable alternatives – such as smarter land-use planning and compensating landowners for environmental services – that would optimise forest management, while minimising negative repercussions on precious and fragile natural resources.

Negative elements of the proposed amendment to the Forest Code:

The draft amendment notably complicates Brazil’s forest legislation, making it nearly impossible to implement and enforce.
Millions of acres illegally cleared prior to 2008 will be legalized through amnesty, resulting in a forfeiture of fines worth an estimated US$4.8 billion.

In the Amazon region, landowners could be allowed to reduce the obligatory required forest cover from 80% to 50%.

Up to 90% of private properties in Brazil could be pardoned from the standing obligation to restore illegally cleared areas.
Large areas of floodplains and other sensitive areas will be opened to cattle ranching and farming.

Forecasted consequences
According to Brazil’s government-led research organization IPEA (Institute for Applied Economic Research), the new legislation could lead to the loss of up to 76.5 million hectares (190 million acres) of forest, which translates to 28 billion tonnes of added CO2 in the atmosphere.

Brazil’s economy, and in particular its agribusiness sector, will suffer from damaged global reputation, decreased access to markets for sustainably-sourced goods, and higher production costs as a consequence of increased erosion and greater need for fertilizers and/or pesticides.
Brazil will likely fail to meet its own international commitments to reduce greenhouse gas emissions and deforestation rates.

Land-use planning for up to 61 million hectares (150 million acres) of underproductive pastures, which are readily available for cultivation without additional deforestation.

Introduction of a strategy for sustainable production in Brazil’s farming and livestock sectors.

Implementation and increase of national and international mechanisms for compensation to landowners for environmental services.