First of all, Tesla revealed the locations of the first six Supercharger stations. All which will allow the Model S to travel long distances with ultra fast charging. All throughout California, parts of Nevada and also Arizona.

The technology at the heart of the Supercharger was developed internally and leverages the economies of scale of existing charging technology already used by the Model S, enabling Tesla to create the Supercharger device at minimal cost.
The electricity used by the Supercharger comes from a solar carport system provided by SolarCity, which results in almost zero marginal energy cost after installation.
Combining these two factors, Tesla is able to provide Model S owners1 free long distance travel indefinitely.

Enough Energy for the Year

Each solar power system is designed to generate more energy from the sun over the course of a year. Especially more than is consumed by Tesla vehicles using the Supercharger. This results in a slight net positive effect. For this is also a green transfer of sunlight going back. I mean generated power back to the electricity grid.

In addition to lowering the cost of electricity, this addresses a commonly held misunderstanding. One that charging an electric car simply pushes carbon emissions to the power plant.

So the Supercharger system will always generate more power. Yes folks more power comes from sunlight than Model S customers also use for driving. So by adding even a small solar system at their home, like I do with Tesla Powerwalls I help.  Because electric car owners can also extend this same principle to local city driving too.

The six California locations unveiled today are just the beginning. By next year, we plan to install Superchargers in high traffic corridors across the continental United States, enabling fast, purely electric travel from Vancouver to San Diego, Miami to Montreal and Los Angeles to New York. Tesla will also begin installing Superchargers in Europe and Asia in the second half of 2013.

In conclusion, the Supercharger is substantially more powerful than any charging technology to date. Thereby providing almost 100 kilowatts of power to the Model S, with the potential to go as high as 120 kilowatts in the future. This can also replenish three hours of driving at 60 mph in about half an hour. That’s the convenience inflection point for travelers at a highway rest stop.

I mean most people who begin a road trip at 9am would normally stop by noon to have lunch. Then they also refresh and pick up a coffee or soda for the road, all of which takes about 30 minutes. 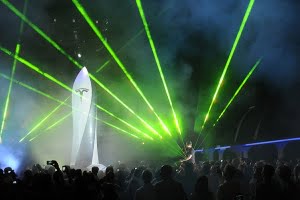