This ends the sale in the 27 countries of the European Union, of cosmetics that continue to be tested on animals elsewhere in the world. The historic move not only marks the end of the testing of any cosmetics on animals in the EU, but for the first time, puts pressure on cosmetics manufacturers in the USA, and elsewhere to end testing on animals, if they want to sell in the huge EU market of 501 million people.

The European Union has in place a safety testing strategy for cosmetics that does not involve animals – almost all of the tests were replaced three years ago – and is being adhered to by some of the biggest cosmetics manufacturers in the world, and some of them have manufacturing operations in the U.S. There is no reason now, that companies in the U.S. cannot adopt the same protocols. It is vital that these tests are adopted in the U.S., to end unnecessary animal testing and to keep U.S. firms competitive in the world’s markets.

ADI’s partner group, the UK’s National Anti-Vivisection Society (NAVS) ran a 30 year campaign against cosmetic tests, with ADI involved in the campaign for the past 20 years.

ADI believes this is not just a victory for ethics but for science, as it has seen the systematic replacement of animal tests with scientifically advanced non-animal alternatives.

A series of humane alternative methods were developed, simply because companies were compelled to find them, in the face of upcoming cosmetic testing deadlines set by the European Parliament.
Jan Creamer, ADI President: “This is an historic victory – an end to horrific and cruel animal tests in Europe, and this perfectly positions the U.S. to move swiftly on this issue.

Several other countries have now introduced bans on testing cosmetics on animals, but the European Union really provides the perfect model for the U.S. to follow because it includes an alternative testing strategy for regulators.

“A huge factor when we were securing the bans on cosmetics testing, first in the UK and then in Europe, was that these tests were unjustified and unnecessary. However, in terms of the safety testing protocols laid down in regulations, this was always complex. People use products such as cosmetics and toiletries over decades, around the eyes and mouth, so they are absorbed and ingested. However, because the European Parliament agreed that it is not necessary to have more and more of these products, they set deadlines for replacement tests to be introduced. That gave industry the incentive to change.

“The simple fact is if we can have an effective safety testing strategy that does not use animals for products that are applied to the face and body each day, then we should be preparing to eliminate animal tests in other areas.

When we campaigned for the Cosmetics Directive it was met by enormous opposition by animal testing companies, but when they had a deadline and were told they had to do it, they found the humane alternatives.”
The ADI and NAVS exposed the horrific nature of cosmetics testing, securing images inside animal laboratories, of racks of rabbits restrained in stocks having products dripped into their eyes, and guinea pigs with their backs raw and inflamed after having products applied to their skin.

For the majority of tests, animals have not been used for cosmetic ingredients in the EU since March 2009. The deadline for the replacement of certain animal tests under the marketing ban was extended to March 2013 in order to allow alternatives to be developed and approved.

ADI also successfully secured an amendment to the new European Directive on animal experiments, which became law this year, calling for a ‘thematic review’ system of replacement of animal research, with a view to setting targets for replacement of other animal tests in a similar way to the target-setting system within the Cosmetics Directive.

ADI hopes that progress will be made next to end the use of animals for testing household products. 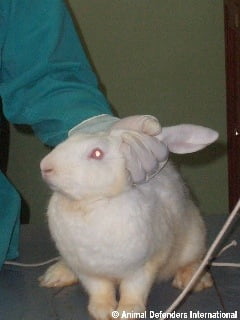 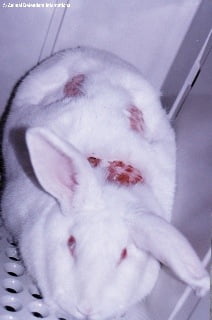 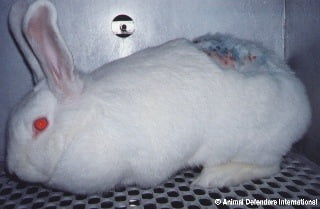