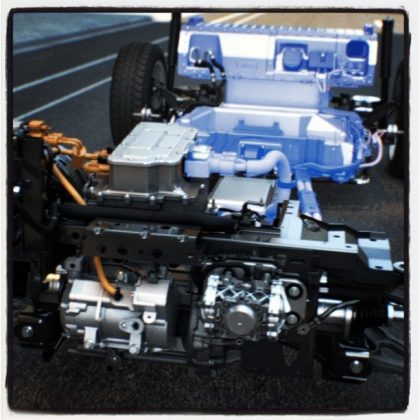 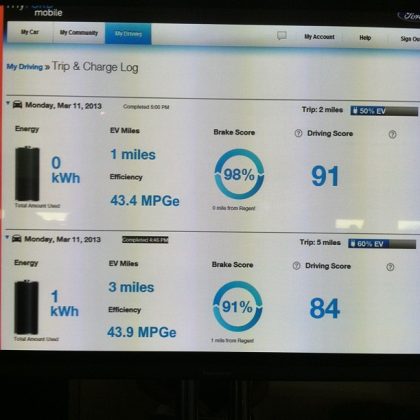 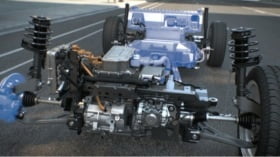 That’s enough gas to travel an estimated 2.5 billion miles – or drive around the world about 100,000 times. Most noteworthy, using power that otherwise would have had to come directly from fuel.  Therefore, originating in either a gas pump or electrical outlet.

And because Ford’s regenerative braking system captures up to 95 percent of the kinetic energy behind a stop. This aids and helps improve fuel efficiency by up to 30 percent. A simple tech that should be in every single car.  I mean think about it. The amount of gas saved and miles generated as a result go up every time a Ford hybrid hits a stop sign or red light.

The recently-launched 2013 Fusion Energi plug-in hybrid is the fifth electrified vehicle from Ford with regenerative braking technology that can capture up to 95 percent of the kinetic energy produced during braking. Kinetic energy, which is converted to heat and lost with conventional braking systems, can be stored in the battery until needed to provide engine power.  Further helping to improve fuel efficiency up to 30 percent.

Competing systems recapture as little as 30 percent of the kinetic energy and can improve fuel efficiency by 9 percent. The difference between Ford’s system and that of others can be seen in mileage estimates.  Also, the Fusion Energi and as well the C-MAX Energi.  These plugin hybrids also feature regenerative braking.  Yet they are EPA-estimated to deliver up to 108 MPGe in the city.

In addition, Ford outperforms the competition by using a more powerful motor.  In addition, they added an advanced lithium-ion battery that can store energy.  Energy that’s faster than the nickel-metal-hydride batteries used in many rival hybrid and electric vehicles.  Most importantly and so cool, it’s Ford proprietary software developed in-house by Ford engineers.

And while competing systems leave it up to the driver to guess the impact of his/her braking, Ford makes it easy through a brake coach feature – part of the SmartGauge with EcoGuide cluster in the instrument panel. When used, the regenerative braking system becomes a fun, “gamefied” feature that differentiates itself from competing systems by using video graphics to show the effectiveness of a driver’s braking practices.

In addition to Fusion Energi and C-MAX Energi, other vehicles from Ford’s electrified vehicle lineup that have regenerative braking are Fusion Hybrid, C-MAX Hybrid, and Focus Electric.
Based on sales volumes during the past 15 years and the average number of miles driven annually, engineers estimate that Ford vehicles with regenerative braking have recaptured and used enough energy to drive to the sun and back 13 times.

Put another way and also the equivalent of 100 million gallons of gasoline was saved.  That is based on average car fuel economy of 24.6 mpg.  This came from the University of Michigan and their Transportation Research Institute.

The gallons of gas and miles created through regenerative braking increase every time a Ford hybrid hits a stop sign or red light, as the company continues winning market share at a rapid pace. Ford had its best hybrid sales month ever in April, selling 21,080 units to reach an all-time-high 18 percent share of the electrified vehicle market, up from 3 percent last year.

The 2005 Escape Hybrid featured a completely redesigned regenerative braking system that optimized efficiency without affecting how it feels to hit the brakes. The redesign introduced one of the industry’s first successful brake-by-wire systems, which allowed vehicle controls to deliver braking via the regenerative system before conventional friction brakes were applied.

Ford’s system goes further than the competition by utilizing a motor with more power, an advanced lithium-ion battery able to store energy faster than a nickel-metal-hydride battery, and proprietary software developed by Ford engineers in-house that brings it all together seamlessly. The result is Ford’s regenerative braking system is able to capture up to 95 percent of the kinetic energy behind a stop compared with only 30-50 percent from some of the competition. 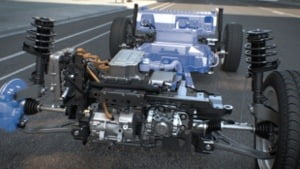 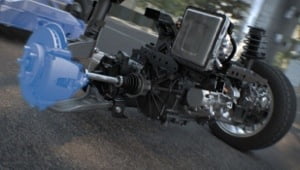