Climate change is altering and destroying important habitats that America’s migratory birds depend on and urgent action is needed to change that dangerous “flight path,” including rapid development of renewable energy sources, according to a new report released yesterday by the National Wildlife Federation (NWF).

Shifting Skies: Migratory Birds in a Warming World details how a warming climate could lead to a decline in some bird populations and even some extinctions if action is not taken to curb carbon pollution and adopt climate-smart conservation strategies.

The report’s foreword, by NWF President and CEO Larry Schweiger, says, “The climate crisis is already changing the playing field for birds, other wildlife and their habitats across America. Urgent action is needed to preserve America’s conservation legacy … We must address the underlying cause of climate change by reducing our carbon pollution and quickly transitioning to cleaner, more secure sources of energy.”

Among the report’s key recommendations: “Invest in clean energy and reduce dependence on dirty fuels. Properly-sited wind, solar, geothermal and sustainable bioenergy will reduce our consumption of carbon-polluting fuels like coal, oil, tar sands and natural gas, which are driving climate change.” [emphasis added] NWF has previously called for half of U.S. energy to come from renewable energy sources by 2030.

In a special section on “Wind Energy and Birds,” the report calls for “strong wildlife safeguards to protect sensitive species and habitats during the siting, construction, and operation of wind energy projects both on and offshore,” and lists several initiatives–all of which have involved active participation by AWEA and wind energy companies:

Coordinating with stakeholders, the U.S. Interior Department is developing much needed guidance and conservation programming for wind energy’s potential impact on protected bald and golden eagles.

Leading wind energy developers are working with federal and state agencies to develop a conservation plan for imperiled birds of the Great Plains, such as the whooping crane and lesser prairie chicken.

Shifting Skies explains that migratory birds face unique challenges because each season they require different places to live, often thousands of miles apart, to raise their young, migrate and overwinter. At least 350 species in North America fly to South or Central America every fall and return in the spring. The report describes how climate change is adversely affecting bird behavior and includes specific examples in many regions of the U.S.:

In addition to development of renewable energy sources, the report recommends other concrete steps to “curb climate change and its impacts on migratory birds, such as sea level rise, wildfires, drought and more extreme weather events,” as follows:

“- Reduce carbon pollution under the Clean Air Act. While the U.S. Environmental Protection Agency’s authority to regulate industrial carbon pollution has been approved by the Supreme Court and repeatedly upheld by Congress, the Obama administration has not yet set carbon pollution limits. It’s time to act.

“- Protect and restore natural carbon sinks. Restoring the ability of farms, forests and other natural lands to absorb and store carbon provides increased benefits to birds and other wildlife by providing important habitat, as well as helping to mitigate climate change.

“- Use climate-smart conservation strategies to protect sensitive habitats and restore degraded areas. Land and water protection efforts increasingly will need to take future climate projections into account to ensure long-term value to birds and other wildlife. Degraded landscapes need to be restored, and citizens can take action to provide important habitat through backyard and schoolyard habitat programs.”

“From backyard wildlife watchers to hunters in their duck blinds, unless we take action now, Americans across the country are going to be asking ‘what happened to all the birds,'” said Dr. Alan Wentz, retired chief conservation officer of Ducks Unlimited and current board member of the Theodore Roosevelt Conservation Partnership. “We know the steps we need to take to safeguard not just birds but all wildlife, our communities, and current and future generations of Americans from climate change. Now it’s time for action.”

According to the National Oceanic and Atmospheric Administration (NOAA), 2012 was America’s hottest year on record. Atmospheric carbon dioxide levels hit 400 parts per million in May 2013, a concentration not seen on Earth for 3 million years.

“Targeted investments in climate-smart conservation strategies can deliver huge returns for America’s communities and wildlife,” said Lynn Scarlett, former Deputy Secretary and Chief Operating Officer of the Interior Department from 2005 to 2009. “We’ll need to work together to solve these challenges, not just across local, state, and federal boundaries, but across party lines.” 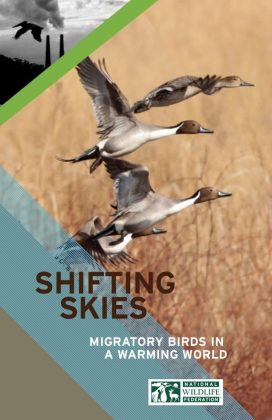