BMW introduced the all-new BMW i3 electric car, constructed in a revolutionary way from next-generation materials. The BMW i3 will go on sale in the US market in the second quarter of 2014, and starts with a base MSRP of $41,350, before any federal or state incentives, and before Destination & Handling fee (currently $925).

The Drive Module, which is constructed out of 100% aluminum, consists of the 22-kWh, 450 lb. lithium-ion battery, electric drive train, MacPherson strut and 5-link rear suspension system and structural and crash components. The battery mounted in the rear, close to the drive wheels, gives impressive performance characteristics while also providing better traction.

According to studies carried out as part of BMW’s Project i, involving more than 1,000 participants and conducted over some 12.5 million miles, it was revealed that the average daily distance covered was around 30 miles. The BMW i3 will be able to travel 80 to 100 miles on a single charge. This can be increased by up to approximately 12% in ECO PRO mode and by the same amount again in ECO PRO+ mode. It is able to recharge in only 3 hours with the use of a 220V Level 2, 32-amp J1772 charger. The SAE DC Combo Fast Charging, which charges the BMW i3 up to 80% in 20 minutes, and 100% in 30, can be had as an option.

If the BMW i3 buyer has a private parking space at their home, BMW i will offer a home charging station, which includes a BMW i charging station for convenient charging. They will even send a representative to install it to any specific need. 360 Electric will also help with public charging by locating the nearest station.

As part of 360 Electric, the BMW i Remote app links to your car and can monitor its battery level, charging status and other charging-related functions, such as heating and air conditioning. The app can also give the cars location, lock or unlock the doors, honk the horn, or flash the lights.

Before driving away in the BMW i3, it is recommended to precondition that battery to the preferred operating temperature of between 60 – 70 degrees Fahrenheit to optimize range. Battery temperature may be monitored through the iDrive system. The battery liquid cooling system keeps the battery at the ideal operating temperature which increases performance and life expectancy. Battery condition is controlled and operated in harmony by the intelligent energy management system. This, combined with Brake Energy Regeneration system extends the vehicle’s range while enhancing its performance. 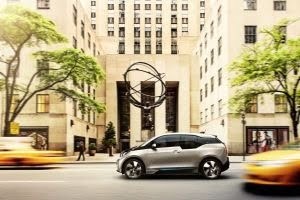